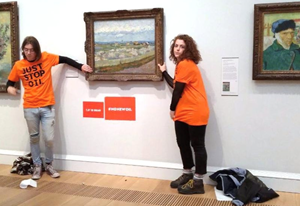 Two young supporters of Just Stop Oil have glued themselves to the frame of a Vincent Van Gogh painting at the Courtauld Gallery in London, as they call for the government to end new oil and gas and for art institutions to join them in civil resistance.

Two young supporters of Just Stop Oil have glued themselves to the frame of a Vincent Van Gogh painting at the Courtauld Gallery in London, as they call for the government to end new oil and gas and for art institutions to join them in civil resistance.

The painting is Peach Trees in Blossom (1889), a view of an open plain outside Arles, France in early spring.

Louis McKechnie, 21, from Weymouth in Dorset said: “As a kid I used to love this painting, my dad took me to see it when we visited London. I still love this painting, but I love my friends and family more, I love nature more. I value the future survival of my generation more highly than my public reputation.

“The scientists are saying we need to end fossil fuel licensing and the government is pouring sand in their ears. I’m not willing to be marched to my death by the fossil fuel companies and their government puppets.

“It is immoral for cultural institutions to stand by and watch whilst our society descends into collapse. Galleries should close. Directors of art institutions should be calling on the government to stop all new oil and gas projects immediately. We are either in resistance or we are complicit.”

Emily Brocklebank, 24  a psychology student from Leeds said: “I’m taking action today because I can’t live in a bubble of normality when society is collapsing around us and people in the global south are suffering so much. Billionaires are getting richer whilst nurses queue at food banks, tens of millions of people across the world are starving and half the world’s population is exposed to extreme danger from heatwaves, floods, fires and famine. Meanwhile the art establishment, the politicians and the fossil fuel companies look the other way.

“I love art, everywhere I go I visit all the galleries. Art is so important, it captures history and a moment in time, but artists and the art establishment are failing us by focusing on the wrong things. We need everyone to focus on the government’s genocidal plans to allow fossil fuel companies to drill for more oil. This is one of the greatest injustices in history. We must resist.”

The action comes amid warnings that the Provence region painted by Van Gogh may soon be experiencing drought. After a dry winter and Spring in which rainfall levels were 45% below historic averages followed by an extreme heatwave in May and June, France is running desperately low on water. As of June 15th, 124 water restriction orders were in place across a total of 39 of France’s 96 mainland départements. Extreme weather, coupled with strikes and civil unrest has prompted the Foreign Office to issue warnings to holiday makers about potential evacuation orders.

Yesterday 5 young supporters of Just Stop Oil were arrested at the Kelvingrove Art Gallery and Museum in Glasgow after they sprayed paint on the walls and floors of the gallery and glued themselves to the frame of a 19th Century landscape painting by Horatio McCulloch, “My heart’s in the Highlands”. They are expected to appear at the Glasgow Sheriff’s Court this afternoon.