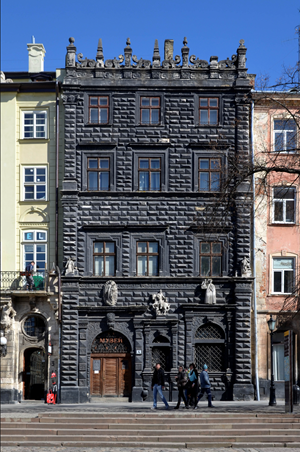 World Monuments Fund (WMF) has launched four new projects as part of its recently established Ukraine Heritage Response Fund to address the immediate, critical needs of heritage professionals in Ukraine and to lay the groundwork for the future rehabilitation and long-term recovery of cultural heritage in the country.

World Monuments Fund (WMF) has launched four new projects as part of its recently established Ukraine Heritage Response Fund to address the immediate, critical needs of heritage professionals in Ukraine and to lay the groundwork for the future rehabilitation and long-term recovery of cultural heritage in the country.

These projects—each developed with local and international partners—include: installing a temporary structure for the protection of the Black House, a remarkable sixteenth-century Renaissance building on the Market Square in the city of Lviv; providing 440 water-mist fire extinguishers for the protection of historic wooden churches, known as tserkvas; and delivering technical equipment to protect and monitor St. Sophia of Kyiv National Sanctuary Complex and Holy Trinity Church in Zhovkva.

“We are hopeful that these first initiatives will provide much-needed support to our partners on the ground in Ukraine and set an early precedent for rehabilitation efforts in the country,” said Bénédicte de Montlaur, WMF President and CEO. “We are committed to supporting local efforts and working with local partners, and we will continue to monitor the situation, so that we can lay the groundwork for swift recovery work.”

Since the start of Russia’s offensive in Ukraine in February 2022, UNESCO has reported that over 150 cultural sites have been partially or totally destroyed in the country. The current crisis requires an immediate response from the heritage preservation community to address the short-, medium-, and long-term needs of the country and its heritage professionals.

World Monuments Fund launched the Ukraine Heritage Response Fund in April 2022 in response to the crisis with $500,000 seed funding from the Helen Frankenthaler Foundation. Additional funding has been raised through individual donations. As a first step, WMF hired a Ukraine Heritage Crisis Specialist based in Ukraine, Kateryna Goncharova, to monitor the situation and assess the immediate needs of local professionals while keeping an eye towards future rehabilitation. And, on June 15, WMF honored Ukraine’s Deputy Minister for Culture and Information Policy, Kateryna Chuyeva, with the 2022 Watch Award in recognition of her commitment to and urgent advocacy for the preservation of the cultural heritage of Ukraine.

The newly announced projects represent an initial phase of work in the country aimed at building connections with local organizations and responding to immediate needs.

Albert’s House, or the Black House, is a sixteenth-century structure in Lviv’s Market Square. In 2019, the Lviv Historical Museum completed an AFCP-supported project to preserve the Black House, including its main facade, courtyard, lobby, and collection of stone sculptures. The inner courtyard of the Black House was also excavated, and an exhibition of stone architectural and sculptural fragments from Lviv buildings was created. Today, the building façade, festooned with intricate sculpture, is particularly vulnerable to damage from nearby explosions from ballistic missiles.

Ukraine is home to more than 2,500 wooden churches, or tserkvas, the largest number in the world. Eight of Ukraine’s wooden churches are included on the UNESCO World Heritage List of Wooden Tserkvas of the Carpathian Region in Poland and Ukraine. They are often located in remote rural communities and are particularly vulnerable to fire, especially in extreme conflict situations.

In response to requests from professionals on the ground, WMF partnered with the Foundation to Preserve Ukraine’s Sacral Arts and the International Council on Monuments and Sites (ICOMOS) to deliver 440 water-mist fire extinguishers that will serve to protect up to 200 tserkvas throughout Ukraine. The extinguishers were sourced from the fire safety provider Safelincs in the UK , who in providing the equipment below cost price, donating accessories and covering transport costs to Poland, allowed the delivery of a significantly larger number of extinguishers than would otherwise have been possible. The Polish Committee for Ukrainian Museums, through the Warsaw Rising Museum and Instytut Pawla Wlodkowica, supported transport logistics, provided warehousing in Poland and organized onward transport by truck to Ukraine. The extinguishers will be distributed by Ukrainian partners, the Center to Rescue Ukraine’s Cultural Heritage, the Heritage Emergency Response Initiative (HERI) and ICOMOS Ukraine.

As a result, WMF has partnered with Cultural Emergency Response (CER), an organization based in the Netherlands, with local support from the Heritage Rescue Emergency Initiative (HERI) and personnel from the National Conservation Area “St. Sophia of Kyiv,” to deliver equipment to Ukraine to monitor the St. Sophia of Kyiv National Sanctuary Complex.

The Holy Trinity Church in Zhovkva dates back to 1720, and was under restoration when the war in Ukraine started in February 2022. As a result, work abruptly halted. To prevent further damage to the church, the upper parts of the building were temporarily covered with plastic sheeting.

In order to provide additional protection for the church over an extended period of time, WMF committed to funding the installation of a temporary waterproof membrane to protect the interior spaces of the church. It will be installed in locations where the roof was removed prior to the start of the conflict to protect Holy Trinity from inclement weather.

World Monuments Fund (WMF) is the leading independent organization devoted to safeguarding the world’s most treasured places to enrich people’s lives and build mutual understanding across cultures and communities. The organization is headquartered in New York City with offices and affiliates in Cambodia, India, Peru, Portugal, Spain, and the UK. Since 1965, our global team of experts has preserved the world's diverse cultural heritage using the highest international standards at more than 700 sites in 112 countries. Partnering with local communities, funders, and governments, WMF draws on heritage to address some of today’s most pressing challenges: climate change, underrepresentation, imbalanced tourism, and post-crisis recovery. With a commitment to the people who bring places to life, WMF embraces the potential of the past to create a more resilient and inclusive society.

The Foundation to Preserve Ukraine’s Sacral Arts is a nonprofit public charity based in Washington, DC, dedicated to the preservation of Ukraine’s churches. Its mission is to train local craftsmen to preserve Ukrainian churches and sacral arts, and to serve as a catalyst for transferring expertise on heritage protection to forgotten and less fortunate communities, and this guides its work.

The International Council on Monuments and Sites (ICOMOS)

ICOMOS is a non-governmental, not for profit international organisation, committed to furthering the conservation, protection, use and enhancement of the world’s cultural heritage. With over 11,000 members, 100+ National Committees, 30 International Scientific Committees and several Working Groups, ICOMOS has built a solid philosophical, doctrinal and managerial framework for the sustainable conservation of heritage around the world. As an official advisory body to the World Heritage Committee for the implementation of the UNESCO World Heritage Convention, ICOMOS evaluates nominations and advises on the state of conservation of properties inscribed on the World Heritage List. ICOMOS is a founding member of the Blue Shield. Since the start of the war, ICOMOS has assisted UNESCO, cooperated with its partner organisations and mobilized its Committees to provide support to the Ukrainian cultural heritage community.

ICOMOS Ukraine, its national committee in Ukraine, is a founding member of the Center to Rescue Ukraine’s Cultural Heritage based in Lviv.

The Lviv Historical Museum (LHM) is one of the oldest museums of Ukraine, established in 1893. Its reach and diverse collection derives from a number of cultural and scientific institutions that were merged in the first half of the twentieth century to form a current museum fund of LHM. The museum is housed in three Renaissance buildings in the Market Square, in the center of Lviv. For now, LHM is one of the most significant scientific and cultural institutions that is eager to protect, research and promote the cultural heritage and history of the region.