Will the Kingdom of Tonga Disappear? Uili Lousi's Impact on the Fight Against Climate Change Through Art

Uili Lousi is among those people who impact the fight against climate change through art. Uili weaves all of his experiences into his artistic practice to create a vibrancy in his work that is described as energy. His work depicts the stillness of FATA-O-TU’I-TONGA in motion and non-motion, asking the question, if the Kingdom of Tonga will disappear.

The answer is, “not negotiable”: climate neutrality must be the objective.

At the COP24 the Kingdom of Tonga underlines its challenges: Rising sea levels, warming oceans, and increasingly extreme rainfall threaten the future of human habitation and subsistence agricultural production in Tonga.

The Kingdom of Tonga is an archipelago of 169 islands, 36 of which are permanently inhabited by its population of around 103,000. Remittances, foreign aid, and tourism are the main drivers of the Tongan economy.

Since 1993, Tongan sea levels have risen by about 6 mm per year, well above the global average. This steady rise threatens subsistence agricultural production and human habitation. The majority of Tonga’s population has settled on the coasts of the larger islands at sea level. The higher ground in Tonga is mountainous and unsuited for human habitation. Several communities have already relocated to other Tongan islands as rising seawater saturated their previous villages. Local infrastructure at sea level requires reconstruction every year, as roads and paths are washed away by the rising sea levels and the more frequently occurring storms.

Warming seas threaten subsistence fishing. The increase in ocean temperatures and seawater acidification harms the health of coral-reef ecosystems and the surrounding ocean. Migratory-fish patterns may be affected by the temperature change and acidification. Tongans rely on coral reefs and the open ocean for subsistence fishing. Sport fishing, which attracts tourism, will likely be impacted negatively as well.

Tonga has undertaken an official climate change policy focused on resilience, the National Strategic Development Framework 2015-2025. The initiative aims to build a more resilient Tonga by the year 2035 through investing in the Joint National Action Plan for Climate Change Adaptation and Disaster Risk Management, including all relevant sector policies and plans in regards to resilience and mitigation. The strategy focuses on strengthening integrated risk-management to enhance climate and disaster resilience; lowering carbon development; and strengthening disaster preparedness, response, and recovery.

Uili Lousi is among those people who impact the fight against climate change through art. Uili is a self-taught artist. His journey began through his interest in philosophy, logic, physics and pure/applied mathematics.

Uili weaves all of his experiences into his artistic practice to create a vibrancy in his work that is described as energy. His work depicts the stillness of FATA-O-TU’I-TONGA in motion and non-motion.

The repetitive motifs create visual matrixes and present dialectical processes of transition from traditional to contemporary, and representation to abstraction.

He expresses that it is, “like a fire that has no smoke and does not burn.” It is just an inner-mounting flame that only illuminates and is at peace with the soul.The works are tactile and precise, which reflects Uili’s attention to detail. 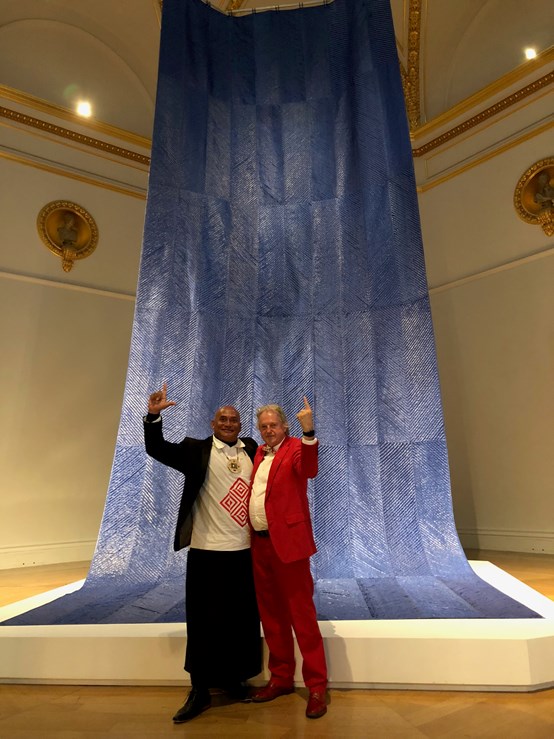 With a bright colour-palette, he takes the art of FATA-O-TU’I-TONGA into new realms that emanate, permeate and emit light and energy.