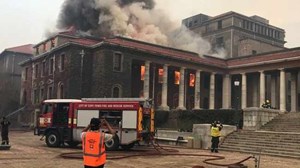 On Sunday morning, the University of Cape Town Libraries was burnt down by a wild fire that started near the memorial to colonial leader Cecil Rhodes.

The director of the UCT libraries has said that the Reading Room of the Jagger Library has been completely gutted by yesterday’s fire. Executive Director of UCT Libraries, Ujala Satgoor, announced late last night that while some parts of the Jagger Library were gutted, the fire was stopped from spreading to other sections of the library.

The fire began Sunday morning near the memorial to colonial leader Cecil Rhodes and quickly spread uncontrolled beneath Devil’s Peak in the national park, in an area popular with weekend hikers and cyclists. Fire fighters battled the blaze throughout the day and into the night. Part of the UCT library, residences and upper campus buildings were also damaged by the fire.

By Monday, winds approaching 30 mph had pushed the fire toward densely populated areas above downtown Cape Town, forcing the evacuation of residents living along some edges of the park. Well-known tourist sites such as the Table Mountain aerial cableway and the nearby Kirstenbosch National Botanical Garden were temporarily closed.

“An unexpected natural disaster struck at the heart of UCT Libraries today and I write this message with a deep sense of sorrow and loss at the havoc and devastation it wrought upon the Reading Room of the Jagger Library. As some of us watched, from on site, with horror and helplessness this elegant and historical library burn, I can only imagine the shock and horror you must have felt as you watched the news reports and pictures of this destruction,” Satgoor said.

“At this stage, we can confirm the Reading Room is completely gutted and thankfully the fire detection system in place triggered the fire shutters thereby preventing the spread of the fire to other parts of the Library.

Satgoor commended the prompt and co-ordinated efforts of the various UCT Properties and Services teams with their facilities team.

The City of Cape Town Fire and Rescue teams were also thanked for all their efforts to control the fire and contain further damage to the Jagger Library.

On Monday morning, UCT Vice-Chancellor Professor Mamokgethi Phakeng said: “Thanks to the UCT leadership team for the swift action yesterday. We managed to accommodate all evacuated students in hotels around Cape Town. To everyone who offered help, we are grateful. Today we’ll start assessing the extent of the damage. UCT will recover. UCT will rise.”