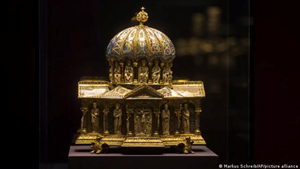 The heirs of Jewish art dealers had claimed that their ancestors sold the medieval artifacts in 1935 to the Nazi government under duress, for a fraction their worth.

A US District Court has rejected a claim made by Jewish art dealers over a trove of medieval ecclesiastical artwork in Germany. The court ruled that the US justice system did not have jurisdiction over the matter.

The ruling, which echoed the US Supreme Court decision on the case in 2021, was a victory for the Prussian Cultural Heritage Foundation (SPK) in the long-running dispute over the artifacts.

Known as the Guelph Treasure, or Welfenschatz, the collection is one of the most important troves of medieval German church art.

The artifacts, which date from the 11th to 15th centuries, are mostly silver and gold, gem-encrusted crosses and reliquaries, along with other altarpieces and shrines. The collection is worth more than €200 million ($200 million).

Artifacts 'Sold Under Nazi pressure'
The legal proceedings over the artifacts date back to 2015. The plaintiffs, heirs of Jewish art dealers, claimed that the treasure was wrongfully appropriated because their ancestors had no choice but to sell it in 1935 to the Nazi government for a fraction of what it was worth.

But the heirs lost their case in Germany, as the government determined that the disputed treasure is lawfully owned by SPK and must remain in the German capital, Berlin.

The cultural foundation rejected the heirs' claim, saying the collectors weren't forced to sell the treasures and that the lower price corresponded with a depressed art market in the midst of a financial crisis.

"SPK has also long maintained that this lawsuit lacked merit, as the Guelph Treasure's sale in 1935 was not a forced sale due to Nazi persecution," SPK president Herrmann Parzinger said on Tuesday, welcoming the court's decision.

Collection 'A Gift for Hitler'
The Guelph Treasure has been on display in Berlin since the early 1960s and is currently at the city's Bode Museum.

The collection got its name after coming into the possession of the royal house of Guelph in 1671. But the family sold 82 items to a consortium of art dealers in 1929 at a time when it was experiencing financial difficulties.

The consortium sold the items to the then-state of Prussia, where Berlin was located, in 1935. Heirs of the Jewish art dealers have claimed that Hermann Göring, Prussia's premier and head of the German air force, presented the treasure to Adolf Hitler as a personal gift.

But the SPK said it investigated the matter and concluded that the items were specifically acquired for the Prussian State collection. 44 of the items are in the possession of the SPK, and the legal proceedings in the US concern 42 of those objects.