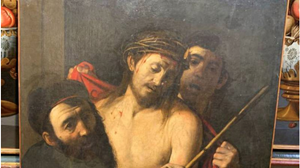 An oil painting that went unsold at an auction in Madrid in April may have been painted by the 16th-century Italian painter Caravaggio.

An oil painting that went unsold at an auction in Madrid in April may have been painted by the 16th-century Italian painter Caravaggio. No one at the auction was interested in the work that was supposed to fetch 1500 euros. If it turns out to be Caravaggio’s, then it’s worth millions.

The Madrid administration has labeled the painting as cultural heritage. “Several rounds of analysis” are still needed, but based on expert judgment, it does indeed appear to be a work by Caravaggio, according to documents that the Spanish newspaper El País has seen.

The canvas of 111 by 86 centimeters shows Christ with the crown of thorns. The work is owned by a Spanish family and can only be sold in Spain, according to the newspaper. The ‘Caravaggio’ is estimated to be worth between 10 and 30 million euros. The auction house attributed the painting to the circle of the Spanish painter Ribera.