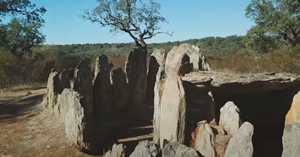 In this site near the Portuguese border, archaeologists discovered a set “unique” comprising “three megalithic enclosures, possibly related to the control of the cycles of the seasons and the observation of “astronomical events”.

nitially, it was to be just one more avocado plantation in Andalusia. But given the archaeological potential of the land of La Torre-La Janera, a 600-hectare estate in the province of Huelva, the autonomous government of this Spanish region estimated in 2018 that it was first necessary to carry out a study on site. And the result was reported to be spectacular.

In this site near the Portuguese border, archaeologists discovered a set “unique”comprising “three megalithic enclosures, possibly related to the control of the cycles of the seasons and the observation of “astronomical events”. Five hundred and twenty-six menhirs were also identified on site, as well as two cromlechs (stone circles) and “various groupings of dolmens”. According to experts from the universities of Huelva and Alcalá de Henares (near Madrid), they were built between the 6th and 3rd millennia BC and could have been used for funerary or commemorative rituals.

The first work of the researchers was published in June in the Spanish specialized journal Prehistory works, et “a complete analysis of the site” will be made public by 2027, adds The country

In the columns of the Spanish newspaper, the archaeologist Primitiva Bueno-Ramírez, who participated in the research, is enthusiastic:

“So far, such a dense concentration of megalithic sites and with such hopes of obtaining archaeological data are not known in Europe.”

Thousands of megalithic sites have been discovered in Europe and in the Mediterranean basin. The best known is that of Stonehenge, in the United Kingdom. In 2019, the Guadalperal Dolmen, located in Extremadura (southwestern Spain), made headlines in the Iberian Peninsula. This site, comprising 140 menhirs built in the 3rd and 2nd millennia BC, had resurfaced after decades spent under the waters of a dam lake and had then been qualified as “Spanish Stonehenge”. An appellation that the site of La Torre-La Janera can rightly claim today.