Under the Same Sun: Art from Latin America today 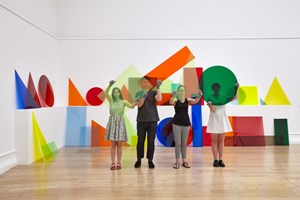 A bunch of colourful geometric pieces are the first to attract the visitor’s eye when entering the bright main room of the South London Gallery. This vibrant work by Amalia Pica – A ∩ B ∩ C, 2013 – together with Erika Verzutti and Gabriel Serra’s fruity sculptures give the kind of exotic welcome that visitors expect from a show about Latin American art. As we walk a few steps to the right, the social and political content starts to be unveiled and keeps finding new ways to disclose itself throughout the whole show.

A bunch of colourful geometric pieces are the first to attract the visitor’s eye when entering the bright main room of the South London Gallery. This vibrant work by Amalia Pica – A ∩ B ∩ C, 2013 – together with Erika Verzutti and Gabriel Serra’s fruity sculptures give the kind of exotic welcome that visitors expect from a show about Latin American art. As we walk a few steps to the right, the social and political content starts to be unveiled and keeps finding new ways to disclose itself throughout the whole show.

Under the Same Sun: Art from Latin American Today, curated by Pablo León de la Barra, Guggenheim UBS MAP Curator, Latin America, opened last June at the South London Gallery coinciding with the aperture of its second space in a former fire station just next door. The show presents recently acquired works from more than twenty artists, spanning from the sixties to the present day, revisiting iconic works from the last decades and building a bridge with younger generations of contemporary artists.

A strong, witty and audacious political critique of their own governments or of the USA’s imperialism is present in works like Carlos Motta’s Brief History of US Interventions in Latin America Since 1946, 2005/2014 or Donna Conlon & Jonathan Harker Drinking Song, 2011 in which the US anthem is played on Panamanian beer bottles and cans. Empowered voices from La Havana resonate all over the space as part of Tania Brugera’s video of her well-known performance Tatlin’s Whisper #6, 2009 and mirror the cymbals that form Carlos Amorales’ We’ll see how everything reverberates, 2012. 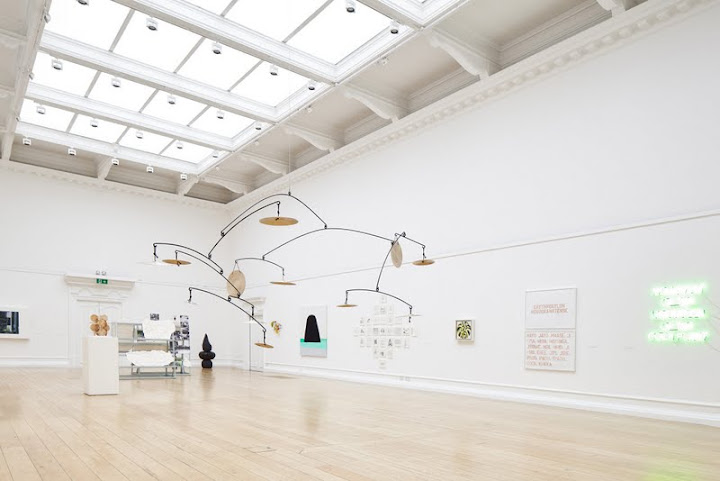 Also referring to socio-political concerns, in video documentation format, there is the work of Alfredo Jaar called A Logo for America. It was presented in New York’s Times Square in 1987 along with the message “This is not America” and defying US understanding of the concept of ‘America’. In 2014 the billboard was re-enacted in the same square and this summer (2016) is going to be shown again on the immense screens of London’s Piccadilly Circus. The work is an optimistic and prevailing call to redefine the continent and its interrelations. Almost thirty years later it remains as current and relevant as ever, facing USA’s political arena and, as Jonathan Jones stated in an article in The Guardian, challenging Trump’s frightening plans to manifest his own conception of what America is. 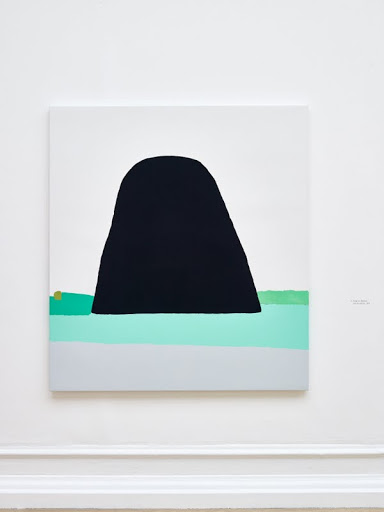 The claim for a cultural and territorial identity is visible throughout the show, translated in certain discourses that tell “this is who I am, this is where I am from and this is what is really happening here”. Perhaps due to an expected lack of connection of the audience with Latin American art, the material provided in parallel to the exhibition is pertinent, accurately detailed and well produced, offering an extended explanation of the context in which each work was created. Visiting shows that have such a territorial content offers the double task of enjoying and learning, not only about the artworks themselves, but also about a socio-political context, a perspective, a language, a goal linked to art much different than the one we normally have from (what we still call) Europe.

The work by Luis Camnitzer Art History Lesson nº8, 2000 actually points at the exclusion of Latin American art in the art history canons and urges viewers to reconsider some facts and take a broader view. In another work from 1972 by Rafael Ferrer, Artforhum, divided between the upper floor and the gallery’s garden, references the famous art magazine and poses the direct question “Art for whom?” 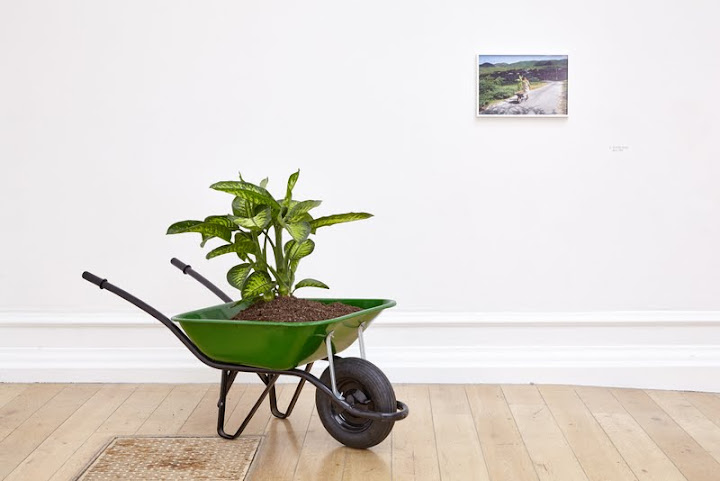 Thinking about the works included in this show and the recent opening of the new Tate Modern, one could think that London’s art scene is currently offering a good context to rethink international art history. The Tate Modern is redefining its collections, with the goal of including more work by women and artists from Latin America, Africa, Asia, the Middle East and Eastern Europe in a balanced presence with European and North American male artists.

The remains of colonialism and the necessary redefinition of the past, and by extension of the present are topics transversally present in the show. Jonathan de Andrade created Posters for the Museum of the Man of the Northeast taking as his starting point the museum that Gilberto Freyre founded in Recife (Brazil) in 1979 to address the mixture of colonisers, African slaves and Indians that made up Brazil. Andrade’s intention was to connect the museum with the present times and to do so he posted ads on Brazilian newspapers to look for men that wanted to represent the Northeast. The result takes form not only in the photographs of proud men, but in the research and conversations that the artist engaged in, which somehow address deeper questions about his own identity as a Brazilian and Latin American artist. 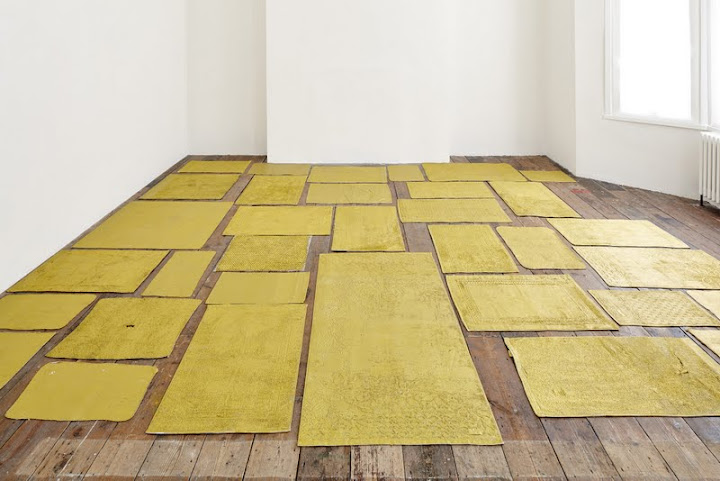 In addition, Adriano Costa reinterprets the aesthetics of Brazilian Neo-Concretism with Straight from the House of Trophies- Ouro Velho, 2013. Gold-painted linens are displayed randomly on the floor in what the artist calls a pre-sculptoric style. The linens echo the monetary incentive of colonisation and reflect on the quick growth of Brazil’s economy in the last years.

With a display significantly different from previous ones at the Guggenheim Museum (New York) and Museo Jumex (Mexico City), the venues at the South London Gallery add a unique personality to Under the Same Sun. Combining a considerable amount of works, all of them with strong content, the curator and staff at SLG have succeeded in finding the right balance for each of the works to stand up in their own right, whilst still being able to talk to each other. Presenting multiple topics, mediums and generations of artists, the dialogues established are fluent and contribute to creating a good introduction to what Latin American art is and, more ambitiously, what Latin America is too. 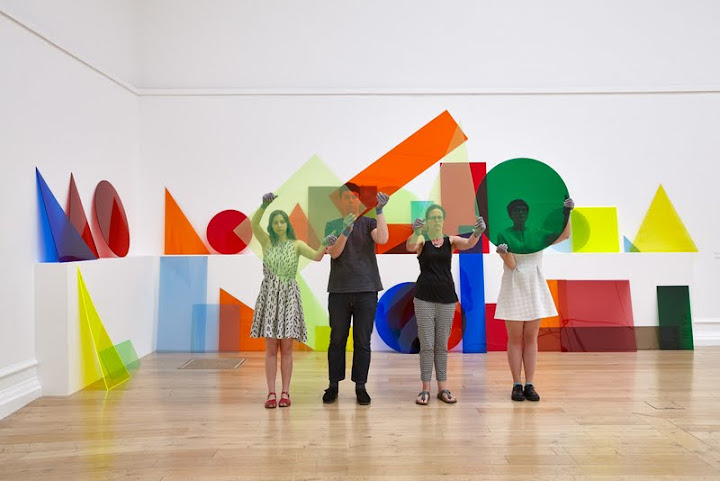 Amalia Pica’s performance A B C runs every Saturday at 1pm until 3 September.

Artist Alfredo Jaar presents a keynote talk to accompany the inaugural presentation of his iconic work A Logo for America, in London's Piccadilly Circus – 28July at the The Royal Institution

Under the Same Sun: Art from Latin America today runs until 4September.