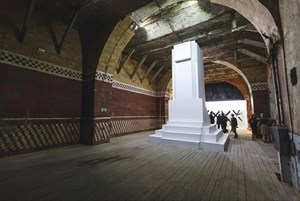 The Centre Pompidou has accepted a proposal to donate, in favor of the Collection of the Musée national d'art moderne, the following significant work Nikita Kadan ‘Pedestal. Practice of Exclusion’ (2009-2011), which was in a private collection.

The Centre Pompidou has accepted a proposal to donate, in favor of the Collection of the Musée national d'art moderne, the following significant work Nikita Kadan ‘Pedestal. Practice of Exclusion’ (2009-2011), which was in a private collection. To be included in the collection of the Centre Pompidou is an important event for any artist's career, will certainly contribute to the expansion of public interaction with contemporary art of the East European direction, and will become an important component for the development of a new international cultural dialogue. The donation of the work occurred with the support of Voloshyn Gallery.

‘Pedestal. Practice of exclusion’ – is the installation of a huge model of pedestal and a text on the wall. This white gypsum-cardboard pedestal stands in the exhibition hall touching the ceiling, leaving no place for the monument. The space for the viewer to pass around the pedestal is narrow. White text on pale grey wall is a chronicle of a "war of the monuments" in post-Soviet Ukraine: vandalizing both Soviet and new national-patriotic monuments.

First variant of installation was produced in 2009, second one in 2011. Nikita Kadan is one of the leading personas of Ukrainian art. He is a member of the artist group R.E.P. (Revolutionary Experimental Space) and founding member of Hudrada (Artistic Committee), a curatorial and activist collective. Nikita Kadan represented Ukraine at the Venice Biennale in 2015.