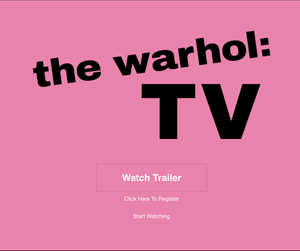 The Andy Warhol Museum has announced the launch of The Warhol TV, a new streaming platform that provides viewers the opportunity to view free, unique museum content as well as to rent a growing selection of Warhol’s more than 400 films and over 2,500 videos from the museum’s expansive collection.

The Andy Warhol Museum has announced the launch of The Warhol TV, a new streaming platform that provides viewers the opportunity to view free, unique museum content as well as to rent a growing selection of Warhol’s more than 400 films and over 2,500 videos from the museum’s expansive collection. Available online at stream.warhol.org, as well as via dedicated iPhone, Apple TV, Android and Roku app.

“At The Warhol we are frequently asked how Andy would have responded to today’s culture of social media and YouTube personalities, where everyone truly does experience their fifteen minutes of fame”, explains The Warhol’s Director Patrick Moore, “and we believe that he would found his own platform. Our goal is that The Warhol TV embodies the spirit and vision of Warhol if he were provided with today’s technological resources.”

Content currently available on The Warhol TV includes rarely seen films created by Warhol, which are available to stream for the first time, and include commentary by museum staff members as well as contemporary filmmakers and experts like Gus Van Zant and Todd Haynes, as well as Capturing Creativity, a new interview series with creators developed and produced by the museum in partnership with No More Rulers, a platform representing empowerment, respect and progression in the art world; Silver Studio Sessions, which feature musical performances; and a selection of screen tests created by museum visitors. Registration is free and the films are available for a three-day rental for $15, with new content added quarterly.

The Warhol TV is generously supported by the Richard King Mellon Foundation.