The exhibition The Potato Eaters. Mistake or Masterpiece? opens at the Van Gogh Museum in Amsterdam on October 8, 2021.

The exhibition The Potato Eaters. Mistake or Masterpiece? opens at the Van Gogh Museum in Amsterdam on October 8, 2021. The painting that Vincent van Gogh made in 1885 in Nuenen, Brabant, is now one of the highlights of the museum collection, but was not widely considered to be a success at the time.

The Potato Eaters. Mistake or Masterpiece? challenges visitors to make up their own minds about what Van Gogh saw as his best ever painting to date. The exhibition focuses on the genesis of The Potato Eaters, Van Gogh’s dedication and perseverance, what the work meant to him, and the criticism that he received for the painting. Some 50 paintings, drawings, sketches and letters from the Van Gogh Museum collection are joined by two important loans to tell this story.

The ‘Potato Eaters Studio’, home to a life-sized reconstruction of the cottage where Van Gogh prepared the painting, hosts workshops and other activities, inviting visitors to get even closer to the painting.

The Potato Eaters. Mistake or Masterpiece? is on display at the Van Gogh Museum until 13 February 2022. Hoping for a Breakthrough

Van Gogh had big ambitions with The Potato Eaters. He hoped to break into the Parisian art market with the painting, and saw it as his ‘masterwork’. His decision to paint a peasant meal was in keeping with the art of his time, but unlike other artists, he did not romanticise peasant life.

Van Gogh spent weeks preparing the painting. He sent letters with sketches to his brother Theo, who lived in Paris at the time, to keep him updated on how he was progressing. The success that Vincent hoped for never came: The Potato Eaters received a critical reception. Van Gogh nevertheless stood by The Potato Eaters throughout his life, he considered it to be one of his best works.

The Potato Eaters. Mistake or Masterpiece? uses 24 paintings, 19 drawings, a sketchbook, three prints, three letters and two books to tell the full story of the painting. The exhibition reveals how Van Gogh grew to become a painter of peasant life during his time in Nuenen, with works including The Old Church Tower at Nuenen ('The Peasants' Churchyard') (1885), Head of a Woman (1884-1885) and the letter with a sketch of Potato Grubbers (1883).

Paintings by contemporaries, including Saying Grace (1861) by Charles Degroux from the collection of the Royal Museums of Fine Arts of Belgium in Brussels, show how in deciding to paint a peasant meal, Van Gogh chose a popular subject.

Van Gogh worked to improve his painting technique in this period, and experimented with complementary and contrasting colours. Paintings such as Still Life with Vegetables and Fruit (1884) and Woman Sewing (1885) show how he practiced depicting colour and light effects.

Van Gogh also spent an entire winter working on more than 40 studies of peasants’ faces. Ten of these are on display in the exhibition, including an important loan from Brussels, Portrait of a Peasant (1885), of one of the figures featured in The Potato Eaters. The exhibition reunites this painting with the study of Gordina de Groot: the only person in The Potato Eaters of whom the name is known.

Van Gogh’s ambition with The Potato Eaters is also reflected in the many preliminary studies that he produced, a method that was not customary for him. He painted studies including Study for ‘The Potato Eaters’ (1885), an oil sketch of the composition, and returned to the cottage countless times in the evening to sketch details of the Brabant interior.

These drawings, such as Clock, Clog with Cutlery and a Spoon Rack (1885) and Hand with a Pot, the Knob of a Chair and a Hunk of Bread (1885), show how painstakingly Van Gogh prepared for his masterwork. He even produced a lithograph to give art dealers and friends a preview of the work. 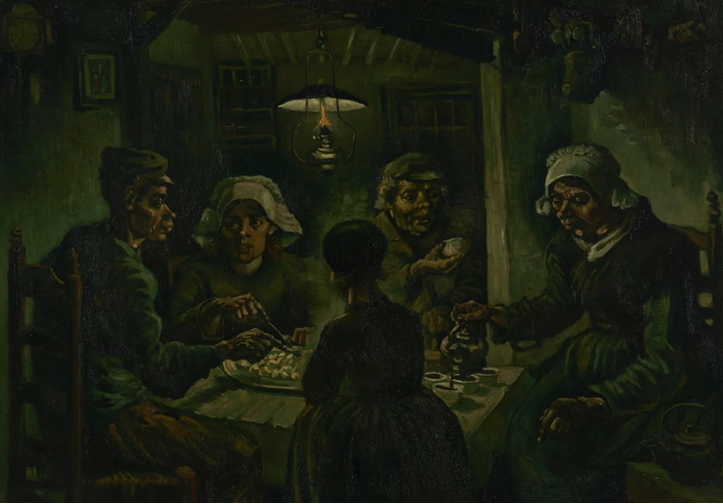 Instead of the favourable reactions that he was hoping for, Van Gogh was heavily criticised for The Potato Eaters. The exhibition uses fragments from correspondence between Van Gogh and his friend, the artist Anthon van Rappard, to give an impression of the response to the painting at the time.

‘[…] ‘What’s that pot doing, for that matter; it isn’t standing, it isn’t being held, but what then? And why may that man on the right not have a knee or a belly or lungs? Or are they in his back? And why must his arm be a metre too short? And why must he lack half of his nose? […] Come on! Art is too important, it seems to me, to be treated so cavalierly’.’

Despite the criticism, Van Gogh still considered The Potato Eaters to be one of his most successful works. In 1887, he even wrote that it was ‘after all the best thing I did’. Several years later, during his time at the asylum in Saint-Rémy-de-Provence in the South of France, Van Gogh toyed with the idea of making a new version of The Potato Eaters.

In the spring of 1890, reminiscing about Brabant, he once again sketched a peasant meal. Several rarely exhibited drawings from Van Gogh’s time in Saint-Rémy, including Interior with Five Figures Around a Table (1890), show just how important his Potato Eaters still was to him five years later.

Closer to the Painting

To help visitors get even closer to the artist and the painting, part of the exhibition has been transformed into the Potato Eaters Studio. The Studio – fully financed by ASML, a main partner of the Van Gogh Museum – is home to a scale reconstruction of the interior of the 19th-century peasant’s dwelling, as featured in Van Gogh’s painting (1885). Visitors are invited to step into The Potato Eaters by taking a seat at the De Groot-van Rooij family’s dinner table or standing where Van Gogh spent hours preparing The Potato Eaters.

The Studio offers a voyage of discovery into peasant life in 19th-century Brabant, with daily workshops and the opportunity to paint a still life or peasant self-portrait. Visitors are also invited to submit photographs showing how and with whom they sit down to dinner nowadays. A selection of the submitted photographs will be displayed in the Studio.

The exhibition is accompanied by The Potato Eaters. Van Gogh’s First Masterpiece, a publication that illuminates the genesis of the painting. The book is written by Van Gogh Museum researcher Bregje Gerritse, who also developed the exhibition concept. The 104-page book is published in Dutch and English, and is richly-illustrated with paintings, drawings and sketches by Vincent van Gogh, in addition to historical photographs of the area where the painting was conceived.

The Potato Eaters. Mistake or Masterpiece? was made possible with the support of the Ministry of Education, Culture and Science and our main partners the VriendenLoterij, Van Lanschot and ASML. The exhibition was also supported by our exhibition partners Hyundai, CêlaVíta and The Sunflower Collective. The Potato Eaters Studio was financed fully by ASML.