The Ghent Altarpiece Reveals its Greatest Secret: The Precise Contribution of Hubert and Jan van Eyck 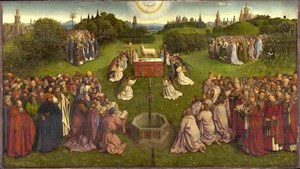 Interdisciplinary research by the Royal Institute for Cultural Heritage (KIK-IRPA, Brussels) and the University of Antwerp (AXIS Research Group, UA) has lead to a breakthrough in one of the greatest mysteries in art history: the precise contribution of Jan van Eyck and his illustrious elder brother Hubert van Eyck to the creation of the Ghent Altarpiece (1432).

Interdisciplinary research by the Royal Institute for Cultural Heritage (KIK-IRPA, Brussels) and the University of Antwerp (AXIS Research Group, UA) has lead to a breakthrough in one of the greatest mysteries in art history: the precise contribution of Jan van Eyck and his illustrious elder brother Hubert van Eyck to the creation of the Ghent Altarpiece (1432). Thanks to intensive study of the data collected during the restoration of the lower register with the Adoration of the Lamb and side panels, the team has identified an underlying painting. This can be attributed to Hubert van Eyck and it shows important compositional differences. For example, Hubert initially painted a natural spring in the middle panel, which was later painted over by Jan with the iconic Fountain of Life. The research brings clarity to this old enigma and opens the door to a new chapter in the study of the Flemish Primitives: the search for other paintings by Hubert van Eyck.

In 2012, the Royal Institute for Cultural Heritage initiated a large-scale restoration campaign of one of the world's most iconic works of art: the Mystic Lamb by the Van Eyck brothers, made for Saint Bavo's Cathedral in Ghent, where it is still exhibited. The two completed stages of treatment - the closed polyptych (2012-2016) and the lower register of the opened polyptych (2012-2019) - have led to stunning discoveries, including the revelation of the original brushwork by Jan van Eyck. This exquisite creation was hidden for centuries under sixteenth-century overpaint and can now be admired again. The team also confirmed the authenticity of the famous quatrain on the frame and restored its beautiful original polychromy. 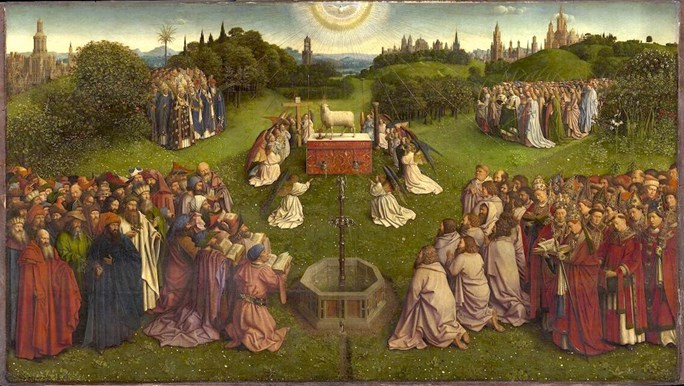 The first two phases of the restoration campaign were financed by the Flemish Government and the Baillet Latour Fund. The work was carried out by the Royal Institute for Cultural Heritage in a specially designed space in the Museum of Fine Arts (MSK) in Ghent. The work was followed by a committee of international experts. The research was supported by the Gieskes-Strijbis Fund (Amsterdam), with contributions from the universities of Ghent and Antwerp.

The Quatrain and the Mystery of Hubert van Eyck (†1426)
In 1823, under overpaint on the frame of the Ghent Altarpiece, a Latin verse was found that contains crucial information about the creation of the masterpiece: The painter Hubert van Eyck, a greater man was never found, started this work. His brother Jan, second in art, completed this arduous task at the request of Joos Vijd. He invites you, on 6 May [1432], with this verse to behold what was done. Since then, the figure of Hubert van Eyck has aroused the curiosity of many generations of art historians.

In the past two centuries, the quatrain has given rise to numerous hypotheses about the genesis of the Ghent Altarpiece and the precise contribution of each Van Eyck brother. We know that Hubert died in 1426, probably during the masterpiece’s creation. However, no other paintings by him are known and his input to the Mystic Lamb remained a great mystery.

In 2020, the restorers of the Royal Institute for Cultural Heritage proved the inscription authentic, removing lingering doubts that the quatrain was an unreliable later addition. This provided a new impulse for investigating the precise contribution of Hubert and Jan van Eyck. The current breakthrough is based on intense interdisciplinary cooperation and a thorough analysis of a multitude of data. For years, the restorers were in close daily contact with the paintings and recorded many minute observations, including under a stereo microscope. Their research was facilitated by new infrared reflectography and, thanks to the University of Antwerp’s contribution, macro X-ray fluorescence scanning (MA-XRF). This new imagery and analysis were made after the removal of the sixteenth century overpaint and allow a deeper look into the underlying paint layers. Other pillars of the research include high-tech laboratory analyses of paint samples, art historical investigation and comparative stylistic research.

That Hubert van Eyck painted parts of the Mystic Lamb is thus for the first time argued on the basis of style study and scientific data. His contribution was not just limited to the planning and the design, as was often suggested.

Who Painted What?
On the central panel with the Adoration, a fairly elaborate underlying painting was found which, thanks to the quatrain, can be ascribed to Hubert van Eyck. He painted the sky, a hilly landscape with a few buildings, cities on the horizon and a meadow. In this first composition, the altar with the Lamb and Angels and some of the central figures are already present. A natural spring was painted in the meadow in front of the altar.

In a second phase, probably painted after Hubert's death in 1426, we recognise the hand of Jan van Eyck. He thus completed and repainted a large part of his brother's work, but left some places untouched. The central motif of the natural spring was painted over with the large fountain we see today. Jan meticulously painted around some of Hubert's central figures, retouched some and added others.

Jan also painted over the landscape, adding more details and the unprecedented variety of vegetation that is visible today. In the sky, he added one layer of azure blue and the colourful halo. Hubert's first composition with its cities on the horizon was also reworked by Jan. He added recognisable motifs such as the tower of Utrecht Cathedral, the former St Bavo's Abbey and the Church of Our Lady in Bruges.

A Third Intervention
Finally, the research shows that a number of details were only added in a third stage. The gilded rays were applied and then the dove of the Holy Ghost was enlarged. Details were added or reworked in the vegetation, the buildings and in some figures. Although we cannot rule out the possibility that this was the work of one or more assistants, these adjustments were probably only made after the death of Jan van Eyck (in 1440), but in any case before the major overpainting in the middle of the sixteenth century.

Pigments and Techniques of the Van Eycks unravelled

The laboratories of the Royal Institute for Cultural Heritage analysed the paint with a wide range of high-tech techniques (HPLC, SEM-EDX, Raman and infrared spectroscopy…). Some samples were even studied with synchrotron (ESRF, Grenoble). The AXIS research group (University of Antwerp) also made a crucial contribution with state-of-the-art scans: MA-XRF and MA-XRPD. The confrontation of all these results led, among other things, to the discovery of surprising additives such as finely ground colourless glass. The Van Eycks' use of zinc sulphate as a drying agent, as mentioned in fifteenth century recipe books, was also confirmed in numerous layers and zones in the painting.

The recent discoveries on the Ghent Altarpiece open the door to a new chapter in the study of the Flemish Primitives: the search for other paintings by Hubert van Eyck. He could be the 'missing link' between pre-Eyckian painting and the radically innovative Ars Nova of his younger brother Jan van Eyck. After all, Jan's mastery appears to come from nowhere in this unsurpassed work, which is his oldest known production.

The research also gives a new starting point for the study of the Ghent Altarpiece panels in the upper register of the opened polyptych. These have not yet been restored and/or analysed using the new research techniques. For this third and final phase, the cathedral church administration is launching a public tender. Funding has already been pledged by the Flemish Department of Culture, Youth and Media, the Flanders Heritage Agency (80%) and the Baillet Latour Fund (20%). The restoration is due to start in 2022.

The Ghent Altarpiece. Research and Conservation of the Interior: The Lower Register describes and illustrates in breathtaking detail all the new discoveries made during the second phase of restoration It is co-authored by the restoration team, scientists and image specialists of the Royal Institute for Cultural Heritage together with the AXIS and ARCHES research groups (University of Antwerp).

The book is published by the Centre for the Study of the Flemish Primitives of the Royal Institute for Cultural Heritage, with the support of the Fondation Périer-D'Ieteren. It is available through Brepols and is the sequel to The Ghent Altarpiece: Research and Conservation of the Exterior, which describes the first phase of the treatment.

Visiting the Ghent Altarpiece, in St Bavo's Cathedral and Online

In the visitors' centre of St Bavo's Cathedral, you can admire the restored panels of the Ghent Altarpiece and various other authentic art treasures in all their splendour. With the help of augmented reality glasses, you can travel deep into the past in the cathedral's crypt and experience the eventful history of the Mystic Lamb and Ghent Cathedral as if you were there yourself. Both the masterpiece and the imposing building come to life in all their glory. More info and tickets: www.sintbaafskathedraal.be

On the website http://closertovaneyck.kikirpa.be you can zoom in on high-resolution images of the Ghent Altarpiece and all the other paintings by Jan van Eyck and his studio.