The Brooklyn Museum Expands Collection with Over 200 Acquisitions 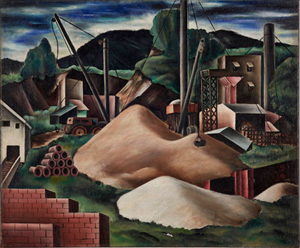 Reflecting a curatorial objective to tell fresh stories from multiple perspectives, the Brooklyn Museum made more than two hundred acquisitions between December 2021 and October 2022, across a variety of categories and mediums. Notably, its holdings by American artists have been broadened to better reflect the diversity of the United States and to create space for underrepresented American voices such as Black, Asian American, Native American, and women artists. These new additions will ultimately be presented in the Museum’s reinstalled American Art wing, a major reinstallation slated to be fully unveiled in late 2024.

Anne Pasternak, Shelby White and Leon Levy Director, Brooklyn Museum, says, “It’s important that our acquisitions speak to the issues of our day—both for current audiences and for future visitors. We want acquisitions to consistently enhance our ability to present inclusive, truthful, and dignified histories. Galvanized by recent calls for racial justice, the multiyear reinstallation of our American Art galleries addresses the differing visions of land, abolition, labor, and identity in the United States, and urges us to look closely and critically at this country’s history.”

The new set of historical and contemporary works entering the collection represents multiple generations of emerging and established artists and a wide range of disciplines.

A selection of highlights follows.

The first of Liza Lou’s works to enter the Museum’s collections, Trailer is an abandoned 1949 Spartan Mansion aluminum trailer that has been transformed into a striking scene encased in monochromatic glass beads. The trailer appears to visitors as a lived-in residence, but alongside the dishes, documents, and cigarettes appear guns and bottles of whiskey, suggesting a darker undertone to the work’s cinematic shimmer. Trailer is emblematic of Lou’s large-scale sculptural practice, through which she creates immersive, domestic environments from meticulously detailed beading that blurs the historical distinction between “fine art” and “craft.”

Two Untitled Paintings (1931, possibly 1917), by Bumpei Usui and Yasuo Kuniyoshi, Gift of Leighton R. Longhi and Rosemarie Longhi
Two paintings by Japanese American artists Bumpei Usui and Yasuo Kuniyoshi are significant and transformational additions to the American Art collection, furthering the Museum’s institutional goal of increasing holdings of works by Asian American artists. In addition, Usui’s work is his first to enter the collection. The two artists contributed significantly to twentieth-century American modernism and were also close friends, with Kuniyoshi serving as an unofficial mentor to Usui. The paintings exemplify both the artistic and the personal relationship between two important Japanese American artists. This can be seen in not only the stylistic similarities between the paintings but also the original frames, which were designed and crafted by Usui, who also excelled as a frame and furniture maker.

Bronx, N.Y. (1924), by Bumpei Usui
Bronx, N.Y., also by Bumpei Usui, is another addition that represents an important period in the artist’s career, when he engaged with emerging modernist practices such as Precisionism. Usui’s paintings became increasingly expressive in the 1930s, with brushstrokes more closely resembling those of Yasuo Kuniyoshi. In this work, however, Usui’s style emphasizes the geometric shapes of bricks and buildings, and explores industry and new development in New York City at the time. 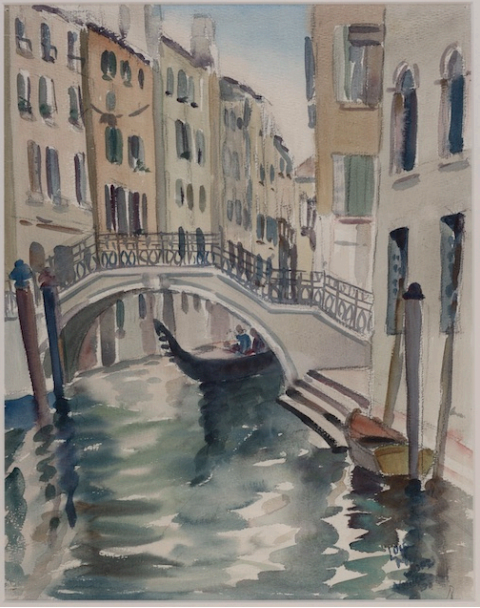 The Bridge by Loïs Mailou Jones exemplifies the artist’s substantial work in watercolor, a technique she taught at Howard University, Washington, DC. This painting, typical of Jones’s Impressionistic and Post-Impressionistic style, is an important addition to the American Art collection, as her watercolor paintings from time spent in Europe are rarely found in public collections. This exciting acquisition expands the collection’s representation of Black women artists.

exquisite ancient Egyptian limestone talatat block with relief decoration joins three other blocks that are already on display at the Museum. Forming the largest and most complete reconstructed group of Amarna talatat in the Western Hemisphere, the four blocks together illustrate a pastoral scene with goats, herders, and trees that once likely decorated the palace in which Tutankhamun grew up. This rare installation will allow the public to better understand the unique style of the Egyptian Amarna Period (1352–1323 B.C.E.) and the scope of its naturalistic scenes, previously unparalleled in Egyptian art.

Bandolier Bag (1850s), by a Lenape (Delaware) Artist
This work is a stunning example of Lenape (Delaware) beadwork dating from the nineteenth century that will allow the Museum to build its collection of Lenape (Delaware) objects. As part of the Museum’s Living Land Acknowledgment project, which grew out of a 2019 convening with representatives of Lenape (Delaware) Nations, the Museum made a commitment to educate visitors, through artwork, about the history of violent displacement, the ongoing erasure of the Lenape people from their ancestral homeland, and the resilience and creativity of Lenape artistic traditions. This bag is a standout piece with its eye-catching blue and pink leaf patterns. In particular, the bag illustrates how Native American women embraced the use of glass beads and innovated a new beadwork appliqué technique that enabled them to create such striking floral art.

Probing the Land VIII (Robert E. Lee, After the Uprising) (2020), by Nate Lewis
Nate Lewis’s Probing the Land VIII (Robert E. Lee, After the Uprising) is the first work by the self-taught artist to enter the collection. Lewis created this image of Confederate General Robert E. Lee as part of a body of work that captures the current rejection of symbols of white authority and power. Lewis’s engagement with Confederate monuments began after the 2015 shooting at the Emanuel African Methodist Episcopal Church in Charleston, South Carolina, by a young white man. After photographing various American monuments, including those honoring Confederate officers in Richmond, Virginia, Lewis approached the surface of this photographic image as if it were a body. Drawing on his experience as a critical care nurse, he used a small blade to make a series of surgical cuts into the image printed on paper as though it were skin, metaphorically exposing festering wounds and gutting history.

The Arm Wrestle of Chip & Spike; aka: Star-Makers (2020), by Oscar yi Hou
Oscar yi Hou’s first solo museum exhibition opened at the Brooklyn Museum in October 2022, and this is his first work to enter the collection. The Arm Wrestle of Chip & Spike; aka: Star-Makers is an outstanding example of yi Hou’s body of vibrantly hued paintings that center queer, Asian-diasporic subjects, drawing analogies between these two marginalized positions. The artist’s layered references—to queer iconography, figurative painting, poetry, East Asian visual culture, and representations of East Asian figures in U.S. popular culture—raise questions about who is considered “American” at this time of social unrest and political polarization.

Fool’s Errand #3 (2021), by Jarvis Boyland, Gift of The Dean Collection
Memphis-born Jarvis Boyland often places figures in domestic settings and situations that suggest many narrative possibilities, as in the vivid and striking painting Fool’s Errand #3, his first work to enter the collection. Boyland often uses surprising or unusual color combinations and stylistic details—here, the pink gloves, blue bandana, fur belt, and patterned bag. The curtain pulled aside to reveal the subject bearing flowers imbues the moment with a quiet sense of drama, not unlike a single cinematic frame. This emerging artist’s work focuses on queer men of color in intimate spaces and navigates the intersections of Black identity, using portraiture to explore and critique the facade of masculinity.