The Birth House of Malevich Discovered in Kyiv

Kazimir Malevich is one of the key figures in avant-garde art. His life and oeuvre has been researched in detail and dozens of books about him are published every year all over the globe. However, it seems that there are still lagoons to be filled and mysteries to be solved. Like the one of his birth house.

Kazimir Malevich is one of the key figures in avant-garde art. His life and oeuvre has been researched in detail and dozens of books about him are published every year all over the globe. However, it seems that there are still lacunas to be filled and mysteries to be solved. Like the one of his birth house.

Kazimir Malevich is often referred to as a hoaxer, in speaking about different information he has shared with different people. Often times, he created legends around his life on purpose. In other cases, he did not know the precise facts himself and said what he thought was correct. The latter is true for his birthdate. He always mentioned 1878 as the year he was born. But when researchers found a document about his birth – the metric book of St. Aleksandr Cathedral in Kyiv – they found out that the Malevich was born a year later, in 1879. The reason for this “mistake” can be explained by many facts. First, the family had eight kids, and four more who died as infants, and there was no tradition to celebrate birthdays before the beginning of the 20th century, only name-days were held so the exact year may have been lost in memory. The other reason may be that Malevich could have changed the date when he was called to serve the army to cut the service period shorter. We might only guess now as there are no practical ways to prove either theory.

The other mystery is his birthplace. Malevich himself never mentioned any addresses but only the name of the city where he was born – Kyiv. This fact is proven by the metric book, but the house still remained unknown. In late 1970’s, Kyiv-based Ukrainian art historian and collector Ihor Dychenko found out that Malevich’s younger sister, Victoria Zaiceva was in the hospital in the city. He went to meet her and asked if she knew where her brother was born. She responded that it was in the house of their aunt Maria Orzhehovska. She was the older sister of their father Severin Antonovich Malevich, and also Kazimir’s godmother. Victoria told Ihor that she could recognize the house if she saw it. She remembered that the street was Bulyonska. Ihor Dychenko called his friend Oleksandr Pavlov, an artist and writer to take them in his car. Pavlov drove them to the area where Bulyonska Street used to be. In the early 20th century, the area was redesigned and Bulyonska was connected to another street and renamed after a famous Bolshevik commander, Vasyl Bozhenko. By the end of 1970’s, there were still many houses left from late 19th century. After a short overview of the area, Victoria stopped near a two-story brick house, typical housing of late 19th century Kyiv. In the yard of the house, Victoria also recognized a wall of yellow bricks from the former stable. Yellow brick was the most common building material for the time and the house was numbered 15. 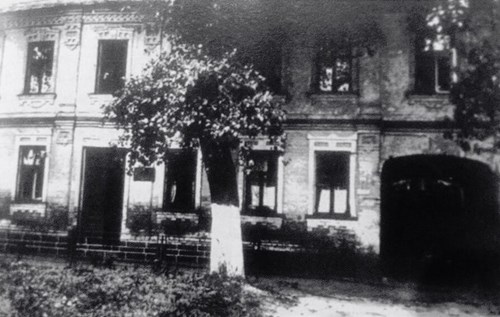 Shortly after the described event, it was announced at a Slavic congress that the house where Malevich was born was discovered and its address was 15 Bulyonska Street in Kyiv. Oleksandr Pavlov made several drawings and a painting of the house. He also took photographs of the home and of Victoria Zaiceva. Unfortunately, the film was lost and only one picture of the house remained. A few years later, the home was destroyed. The land belonged to the Institute of Dwelling and they built a large new building there. In the following years, the address spread from one book to another and no one ever questioned its origin or accuracy because no documents proved otherwise.  In December 2017, research for a film documentary on Malevich found new archive materials. In trying to find proof for the birth house on Bulynska, the author of this article found documents about a home that belonged to Maria Orzhehovska at least between the years of 1871 and 1889. It was the only housing in her name and included a sizeable piece of land, measuring 10 x 31’5 “sazhen” (1 sazhen is equal to 2,1336 meters) with a wooden house, cellar, barn, shed and a well. In 1872, she redesigned the barn into a dwelling house and built another 4-room outhouse in the garden. Unless she had other unknown houses elsewhere, this house on Zhylyanska Street was her home in Kyiv for at least 18 years. Maria was married and had one son. Considering that no other homeowners with last name Malevich were found, we can assume that Severin Malevich stayed at his sister’s home at the end of 1870’s into the early 1880’s. And in one of the houses, Kazimir Malevich was born. 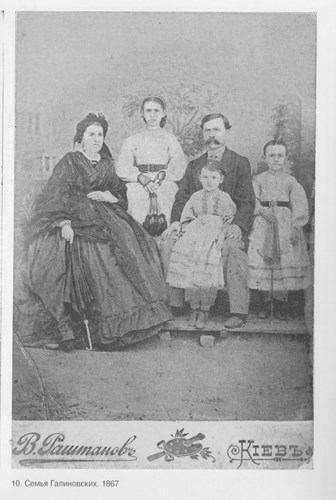 Map of Kyiv, 1879 with the marked house on Zhylyanska Street

Zhylyanska Street near Pankivska is at the edge of two areas of the city – a more respected one of wealthy citizens (a few of the homes are those of famous cultural and political figures of the time) and the less privileged. The street was built in the 1830’s and the rest of the area was connected with the building of the University of St. Vladimir. Zhylyanska is parallel to the railway and was the edge of the city until the end of 19th century. In 1870’s, the street was reconstructed and many of the old buildings were destroyed. All of the squares around former Orzhehovska’s mention have been totally redesigned. In approximately the same place where the home was, there are two multi-story buildings and a yard for communal service. Nothing about the place reminds us of its 150-year old history now. Thanks to the new discoveries however, the site may be brought to the attention of historians and art lovers.

Why did Victoria Zaiceva point out the wrong house? This might be explained by the temporal distance between her childhood memories when she could have visited relatives in Kyiv and the fact that at least after 1899, Maria Orzhehovska no longer owned the home on Zhylyanska and moved to the house in Bulyonska, where number 58 later turned into number 64. This second house of Orzhehovska was ruined either during World War II or right after and was no longer there when she returned in late 1870’s so she would have been unable to see it. The other reason may be that within two blocks of house number 15 on Bulyonska, there was another aunt’s house, her mother Ludovika’s sister. Aunt Helya – Magnushevska Olena Oleksandrivna lived on Laboratorna 12 (the house was not preserved to present times). Ludovika Malevich visited her sister in the time period from 1910-1920’s, while we could not find any signs of Maria Orzhehovska or her family members in Kyiv after 1909. There is also very little known about her life and her family. We can say that after 1899, her husband Ivan Voicehovych Orzhehovsky owned different houses and they may have divorced. Since 1901, their son Oleksandr Ivanovych was the owner of his father’s house, so likely his father had died or moved from Kyiv. There is a family legend that Victoria told: her husband was a gambler and lost all of their property in cards. Afterwards, Maria became the mistress of a Polish military man who supported her and her son. However, this legend has no documents or proof. 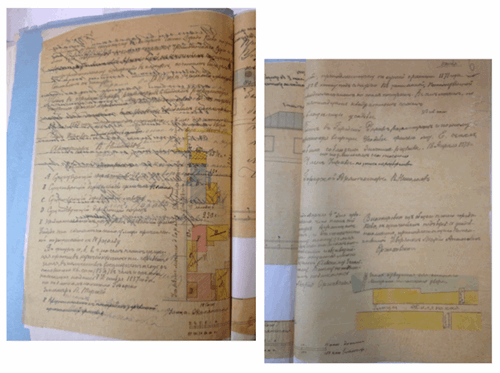 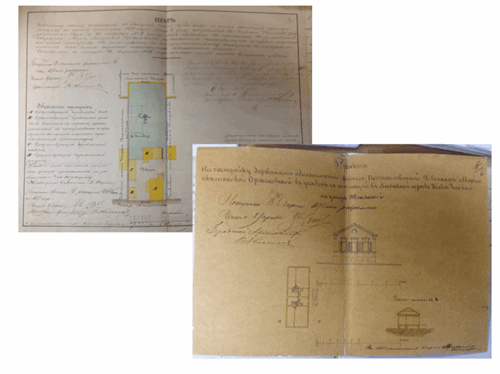 Plan of the homestead of Maria Orzgehovska, 1872 (from the discovered archival materials)

It is surprising that we can still discover basic information about one of the most influential artists in art history. This does not mean that the researchers failed to do their work, it only shows how many details can be hidden behind the general facts. The story of the house will soon be shown in a documentary: Malevich. Born in Ukraine, which is shot in the Ukraine. The film will discuss the Ukrainian-based facts of Malevich’s life and work. There is also a film being made by Hans Richter based on a Kazimir Malevich script. The film will be released in spring 2018.

By Tetyana Filevska
Tetyana Filevska is a free-lance art-manager and scholar based in Kyiv, Ukraine. Graduated from the Department of Philosophy at Taras Shevchenko National University of Kyiv. Has worked for the EIDOS Arts Development Foundation, CSM/The Center for Contemporary Art Foundation, and the IZOLYATSIA Platform for Cultural Initiatives, as well as at Mystetskyi Arsenal as part of the Education and Public Programming team for the First Kyiv Biennale of contemporary art, ARSENALE 2012. She was a co-curator of the course “Malevych’s Kyiv Lectures: A Reconstruction” (November–December 2015). She initiated and organized International conference “Kazymyr Malevych: the Kyiv Aspect” (6-9 October 2016). Her academic interest is modern art, Ukrainian avant-garde art and Kazimir Malevich.