Symbolism in Art: The Egg 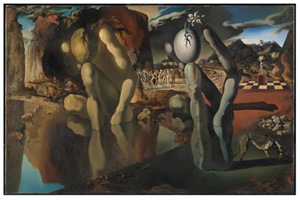 Born in Catalan Spain in the town of Figueres, 1904, Salvador Dali gained international recognition as the leader of the surrealist movement. Never limited by genre or style, Dali is best remembered for his paintings which evoked familiar landscapes filled with familiar objects that were at once easy to recognise and at the same time, hauntingly altered, out of context and defying all expectation. Dali created films, paintings, sculptures and photography and after his death in 1989, left behind a sizeable body of work.

As a young boy, Dali attended the San Fernando Academy of Fine Arts in Madrid, gaining early recognition with a one-man show in Barcelona at the young age of 21. He reached wide-scale public attention at the age of 24 when three of his paintings were shown at the Carnegie International Exhibition in Pittsburgh. Within a short time, Dali had become the world’s best-known surrealist, a reputation that was sealed following the release of his painting The Persistence of Memory, perhaps his most recognisable work. During World War II, Dali fled Europe and found sanctuary in the United States where he continued to gain critical acclaim.

Dali’s work is rich with symbolism. Several icons recur repeatedly in many of his works including clocks, ants, elephants, snails and eggs. In the Metamorphosis of Narcissus, Dali re-tells the Greek myth of Narcissus, the man who fell in love with his own reflection and died of frustration when he found he was not able to embrace himself. Pitying his plight, the God’s immortalised him as the Narcissus flower, which can be seen sprouting from the egg in this painting.

Ancient traditions used to link the egg to the creation of the universe, suggesting that the Earth itself may have been born out of an egg. There is also an interesting contrast between the soft interior and the protective tough exterior, evoking ideas of protection and hidden secrets.

Eggs have particular resonance in the Christian faith where they have become associated with Easter and the resurrection of Jesus Christ. Eggs also take on an important role in the Jewish Passover holiday where they have become a symbol of sacrifice and loss. Painting or decorating eggs has been a popular tradition in many cultures around the world for thousands of years.

For Dali, the egg usually plays a hopeful role, often coming to symbolise new beginnings or purity amidst the surrounding chaos. In the Metamorphosis of Narcissus, Dali splits his canvas into the four-parts of the story, subtly delineated by changes of tone and construction. The egg appears in the fourth and final story element. A cold grey hand holds the egg aloft, out of the water. From it’s shell a single, beautiful Narcissus flower has emerged. In this image the egg has become a symbol of hope and rebirth, it is the vessel from which Narcissus may begin again, its smooth shell hiding the mechanics by which new birth occurs.