Symbolism in Art: The Butterfly 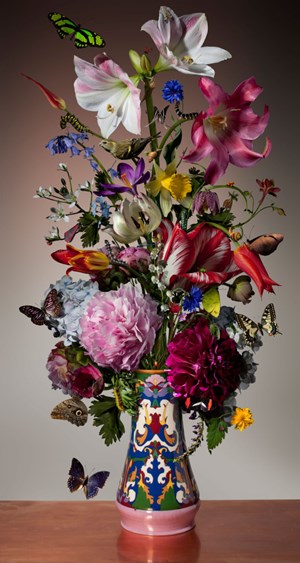 Bas Meeuws (1974) is a photographer from the Netherlands, who has won international acclaim for his richly detailed studies within the traditional Dutch genre of floral still life. Close to home his work has been exhibited in public and private institutions such as the Museum Jan Van Der Togt (Amstelveen), Rockoxhouse (Antwerp), and others.

Bas Meeuws (1974) is a photographer from the Netherlands, who has won international acclaim for his richly detailed studies within the traditional Dutch genre of floral still life. Close to home his work has been exhibited in public and private institutions such as the Museum Jan Van Der Togt (Amstelveen), Rockoxhouse (Antwerp).West-Fries Museum (Hoorn) Museum de Zwarte Tulp (Lisse), Gorcums Museum (Gorcum) and Paleis het Loo (Apeldoorn).

Meeuws’ work is full of symbolism. In these compositions, ‘Untitled (#87) and ‘Untitled (#90), 2013, the central point of interest is an exotic butterfly. And when you consider this beautiful insect was once a caterpillar, it is not hard to recognise its presence in the photo as an example of change and transformation.

We might even infer from the insect’s life cycle that metamorphosis is the essence of life. To look at one of Meeuw’s many layered photos is also to become, like this fine butterfly, seduced to the point of disregard for danger by this bouquet which he presents.

But the butterfly has a secondary meaning. To many artists it has been an expression of joy and a certain lightness of being. Did Meeuws also have this in mind when he captured this moment? Joy would be an appropriate response to the flowers themselves, which have for centuries given the people of the lowlands such pleasure.

One may forget that in the Golden Age of Dutch still life, few artists would have been able to afford to fill a vase with blooms like this. This background gives ‘Untitled (#87) and ‘Untitled (#90) a political dimension, and a reminder that times change, as surely as butterflies.

Idea of the series belongs to Dirk Vanduffel.