Symbolism in Art: The Bull in Picasso’s Guernica

Picasso was once quoted as saying ‘If all the ways I have been along were marked on a map and joined with a line, it might represent a minotaur’. Certainly, the magnificent minotaur was certainly one of Picasso’s most persistent obsessions, as was it’s less fantasistic cousin, the bull. The bull and the bullfighter are repeated images in Picasso’s work, seeming to speak to his Spanish roots.

Pablo Picasso is one of the most recognised names in art history. He influenced the art scene around the world in the 20thcentury and his style and influence continue to this day.

Picasso spent most of his lifetime living in France, but was born in Malaga, Spain. He was raised in a Catholic family, although he later rejected all religion and declared himself to be an atheist.

Picasso’s father was a successful artist who taught art classes and curated exhibitions at the local museum. From an early age, he taught his son the art of oil painting and drawing. At the age of 13, he enrolled his son at the School of Fine Arts in Barcelona, where he was a teacher. Picasso was a good student and went on to study at the Real Academia de Bellas Artes de San Fernand in Madrid, one of Spain’s most prestigious academies. 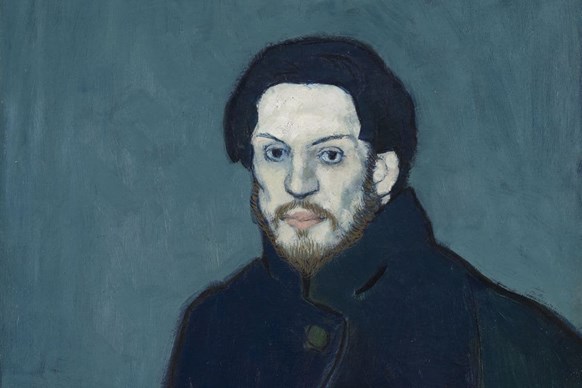 In 1900, Picasso left Spain to travel to Paris where he found a flourishing art scene and took a room with the poet Max Jacob. Together, the pair lived in sparse surroundings, often resorting to burning the painter’s works to stay warm. Inspired but unable to sustain himself, Picasso returned to Madrid where he worked on a literary magazine called Young Art. Around this time his work began to take on a more stylised form and he began to leave behind his full, official name, instead signing his art works simply ‘Picasso’.

Around this time Picasso also entered a phase often known as his ‘Blue Period’, in which he began creating works coloured in shades of blue with accents of colour, later switching to warmer shades of pin around 1904. Around 1907, Picasso began to paint deconstructed objects and geometric shapes. His work around this period set the scene for the cubist movement. As World War I broke, Picasso stayed in his studio and continued to paint, eventually incorporating elements of collage into his cubist works.

Over the years, Picasso’s style continued to develop and evolve. Around the 1920s, Picasso returned to a more neoclassical form of work, but was quickly inspired to return to his more surrealist work as the French Surrealist Movement began to grow. In the 1930s, Picasso created one of his best-known works of art – Guernica. A direct depiction of the horrors of the Spanish civil war, the work is overtly political.

On April 23, 1937, the Nazi air force carried out an aerial bombing on the Spanish town of Guernica at the behest of the Spanish Nationalist faction. The attack caused widespread controversy because it was a military attack on a civilian town. The exact number of people killed remains disputed, but it is known that several hundreds died in an unprecedented act of war crime.

The incident shocked and inspired several artists at the time. Picasso was commissioned by the Spanish Republic to create a painting in response the incident. Guernica depicts the horrors of war and the immense tragedies inflicted on innocent lives. Painted in black and white with some blue-scale accents, the work is stark, paired back and muted. It feels as though Picasso is abandoning the colour palette in an effort to demonstrate the bleakness and the lack of humanity in the scene. The black and white is also symbolic of newspaper print and suggests that Picasso is reporting on an important historical event.

Amongst the sea of fractured, displaced humanity, the image of distorted bull looms large, floating above the sea of tortured bodies.

Picasso was once quoted as saying ‘If all the ways I have been along were marked on a map and joined with a line, it might represent a minotaur’. Certainly, the magnificent minotaur was certainly one of Picasso’s most persistent obsessions, as was it’s less fantasistic cousin, the bull. The bull and the bullfighter are repeated images in Picasso’s work, seeming to speak to his Spanish roots. The first image of a bull actually appears in Picasso’s work from when he was just seven years old, beginning to learn the art of studying forms with his father’s careful instruction. It is also known that Picasso kept a large wicker mask of a bull in his studio.

The bull is a complex figure of symbolism. At once masculine, strong and sturdy – a figure of anger and aggression, but all too often also the victim, killed in a show of strength, surrendered in an act of ritual or tamed and reduced in power by man’s superior cunning.

Traditionally, the bull is thought to symbolise stamina, fertility and hard work. It is strong and sturdy. Above all else, it is a complexly fragile symbol of power.

Some critics have speculated that Picasso felt many personal parallels with the bull, incorporating it into his work as a symbolic form of self-portrait. That it is he himself who is floating above the carnage, bearing witness to the horrors below. Others have argued that there is a form of masculine energy being evoked. That the horrors of the war are overlooked by the ferocity of male anger. Others yet have pointed to the bull as the symbol of Spain, of the pain and confusion of the civil war and Spanish values adrift and distorted above the chaos.

For Picasso himself, he refused to answer the speculation and questions regarding the symbolism of the bull and it’s pictorial companion, a dying horse. “These are animals. Massacred animals. That’s all as far as I’m concerned…”

Once completed, the work was taken on an international tour in an effort to educate people about the Spanish Civil War. It had an impact and brought widespread attention to the horrors of the conflict and the tragedy of the bombing of civilian people. The painting defies the idea of war as a heroic, brave act, reminding us of the reality of death, division and individual loss – in this care overlooked by a looming figure who is hard to identify and hard to pin down. The bull of Guernica evokes strength at the same time as it evokes loss and tragedy. It reminds us of the masculine, lost virility and conquered power. The bull is so much more than a slaughtered animal, but Picasso will leave us to our own conclusions on the matter.