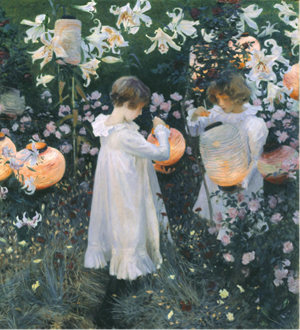 The lily is one of the most potently symbolic flowers. Often associated with humility, devotion, purity and innocence, they are often presented at weddings and christenings, evoking chastity, femininity and fragility.

Born in Italy to American parents in 1865, John Singer Sargent trained in Italy, Germany and Paris and then settled in London where he gained a reputation as one of the world’s greatest portrait artists. His work was prolific and he produced nearly 3,000 pieces in his lifetime.

Sargent travelled to the US frequently, finding many clients in the growing economy there. Whilst in Paris he studied with the revered painter August Carolus-Duran who taught him a more progressive, less formal style. Up until that point, Sargent had relied upon a traditional academic approach, under painting the canvas first and meticulously plotting the details. Carolus-Duran taught him to more freedom with his technique, paining what he saw directly on to the canvas with a loaded brush. Henry James once commented of the young Sargent that he had the “the slightly ‘uncanny’ spectacle of a talent which on the very threshold of its career has nothing more to learn.”

Sargent’s work was praised and sought after and his reputation spread throughout the western world. In 1884, he was invited to show a portrait at the Paris Salon, a place he had displayed his work many times before. His portrait, titled Madam X, caused ripples throughout the arts community. Said to be far too provocative, the painting featured a young socialite named Virginie Amelie Avegno Gautreau, her pale flesh contrasting with the dim colours of her dress and background. The sensation caused by the paining impacted Sargent’s career greatly, slowing down business and tarnishing his reputation.

Sargent fled to England to resume his career and leave the scandal behind. During the summer of 1885, he took up residence with his friend, Francis David Millet, at his Cotswolds home. During the course of the summer, Sargent became interested in the dusk light and the effect it had on the garden around him. Every evening, he would wait in the garden until the light was just right, and then begin a few minutes of painting. As the summer turned to winter, Sargent ran out of time. He didn’t finish his work until the summer of 1886. Friends spoke of his distinct sense of joy as he worked on the piece. The resulting painting, Carnation, Lily, Lily, Rose, shows two young children, surrounded by foliage and flowers and dressed in white. They light lanterns as the day turns to night.

In 1887, the piece was displayed at the Royal Academy summer exhibition where it received a mixed reception. Some complained that Sargent’s style was too French, but Sir Frederic Leighton, President of the Royal Academy, liked the work so much that he encouraged the Tate Gallery to buy the work. It was the first of Sargent’s works to be displayed in a public gallery and can still be seen in the Tate Britain.

Sargent recovered his reputation and went on to regain the praise and accolades he had once enjoyed as a portrait artist. He returned to a more traditional style and appeared to focus on technique and skill in his commercial work. He had the ability to create work that was technically brilliant, but which also seemed to capture something of the essence of his subject.

In his private work, Sargent began to experiment with watercolours and outdoor paintings. His private work took on a more relaxed, Impressionist style. In his later years he devoted increasing amounts of attention to this stylised work, creating murals, landscapes and sculptures. These late works are often thought to represent something of Sargent’s true style, uninhibited by the need to please.

Sargent died in 1925, leaving behind him a wealth of work and a reputation as one of the greatest portraiture artists of all time. During the 20th century, some of Sargent’s private works also gained critical attention.

Carnation, Lily, Lily, Rose undoubtedly shows Sargent’s Impressionist leanings, but is also a testament to his technical ability. The British fashion at the time was to create art that captured moments of beauty. This work seems to show Sargent’s interest in adapting to the style of his new home.

The lily is one of the most potently symbolic flowers. Often associated with humility, devotion, purity and innocence, they are often presented at weddings and christenings, evoking chastity, femininity and fragility.

In Christianity, white lilies are often associated with innocence. They are often referred to as Madonna lilies, evoking the Virgin mother. This reference to the mother Mary is poignant, as the two sides of femininity are represented by Christianity’s two Marys: the virgin and whore.

The lily has always had a dual symbolism. As with Madam X, its pale colouring and feminine shape draw the eye, reminding us at once of innocence and sexuality. Often present at both weddings and funerals, it captures feminine innocence and purity, but thanks to its shape and seductive fragrance, it also holds close associations with eroticism and sexuality. Sargent’s personal batter to re-shape and save his own career amidst scandal and speculation are reflected in this symbolic flower. It is at once sweet and loved, but also tinged with a more human, less innocent identity.

In Greek mythology the lily was thought to have been created from the breast milk of the goddess Hera, wife of Zeus. Ancient Greeks often associated lilies with motherhood and brides were often given crowns of lilies as a blessing for a fruitful, happy marriage. As these young girls, dressed in demure, white gowns, carry out their simple tasks amid a beautiful English garden, the lily flowers surround them, simultaneously confirming and undermining the purity of the scene.