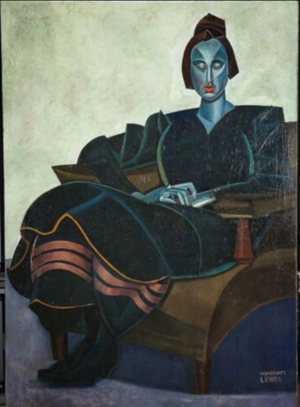 Two students at The Courtauld have rediscovered an important lost masterpiece by one of the early 20th century’s most radical female abstract artists, Helen Saunders (1885-1963) hidden beneath a portrait by the modernist artist Wyndham Lewis (1882 – 1957).

Two students at The Courtauld have rediscovered an important lost masterpiece by one of the early 20th century’s most radical female abstract artists, Helen Saunders (1885-1963) hidden beneath a portrait by the modernist artist Wyndham Lewis (1882 – 1957).

The students were investigating the painting Praxitella (1921) by Wyndham Lewis, one of the highlights of the collection of Leeds Art Gallery, as part of a research project at The Courtauld’s Department of Conservation in 2019. The painting depicts a portrait of pioneering film critic and curator Iris Barry. Scholars have previously suspected that Lewis painted over an earlier composition, as the surface of the painting has an uneven texture and forms lurking underneath, as well as different colours visible through cracks in the paint layers.

X-rays uncovered an ambitious abstract composition totally different from the style of Lewis’ portrait. The students identified the work underneath as a painting not by Lewis but by his friend and colleague Helen Saunders – a fellow member of the radical, short-lived British Vorticist group who was known to have fallen out with him.

The rediscovered work is thought to be Saunders’ lost painting Atlantic City, which depicts a fragmented modern metropolis, painted around 1915. The former students, Rebecca Chipkin and Helen Kohn, made the discovery during a six-month technical analysis of Praxitella where they painstakingly analysed X-rays of the huge canvas, examining the painting’s chemical composition using high-resolution scanning equipment. It was only after they spotted a reproduced image of Atlantic City in Blast, the avant-garde journal of the Vorticist movement, that they identified the artwork beneath Wyndham Lewis’ painting.All of Saunders’ Vorticist paintings were thought to be lost before now. It is hoped the rediscovery of this major work will spark greater interest in her work and the work of other female painters, whose work has historically been overshadowed by their male contemporaries.

Why Lewis painted over Atlantic City in 1921 is unknown. He may have been turning his back on Vorticism in favour of a new figurative approach. He may have not been able to afford a new canvas. Or his erasure of one of Saunders’ most important paintings may have been the result of the pair’s estrangement in 1919, which caused emotional distress for Saunders.

“We realised that when we turned the image of Atlantic City upside down, it had striking similarities with the composition seen in our X-rays of Praxitella,” Chipkin said.

“We were just flabbergasted. It’s taken nearly a hundred years to rediscover Atlantic City. We hope our findings will spark more interest in Saunders’ work and the work of other female Vorticist painters, who are overshadowed by male Vorticists, such as Wyndham Lewis. It also gives hope that there are other hidden Vorticist paintings waiting to be found.”

A new display in The Courtauld’s Project Space will present Lewis’ Praxitella alongside the x-ray and partial colour reconstruction of Atlantic City, as well as a range of technical material to tell the story of this remarkable discovery.

To coincide, The Courtauld’s Drawings Gallery will stage the first exhibition in over 25 years of Helen Saunders featuring a major group of 18 of her drawings, generously presented to The Courtauld in 2016 by the artist’s relation Brigid Peppin. Thanks to this gift, The Courtauld holds the largest public collection of the artist’s work.