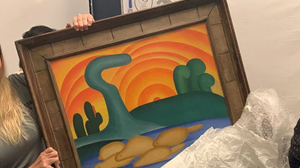 The painting “Sol poente”, by the Brazilian painter Tarsila do Amaral, valued at 250 million reais (about 50 million dollars) and which had been stolen from an elderly multimillionaire for her own daughter, was recovered in Rio de Janeiro.

The painting “Sol poente”, by the Brazilian painter Tarsila do Amaral, valued at 250 million reais (about 50 million dollars) and which had been stolen from an elderly multimillionaire for her own daughter, was recovered in Rio de Janeiro, authorities reported Wednesday.

The painting, one of the main works by Amaral (1886-1973), considered the greatest exponent of Brazilian painting, was located under a bed in the residence of one of the members of a gang of swindlers, which was apparently led by the woman’s 82-year-old daughter.

According to the Civil Police, the gang stole an amount valued at 720 million reais (about 144 million dollars), including works of art, jewelry and money requested from the old woman for fraud and extortion.

So far, at least four people have been captured in the operation carried out by the Special Police Station for the Elderly in Rio de Janeiro, in compliance with six arrest warrants and other search warrants, in addition to blocking accounts bank accounts and assets of the suspects.

According to the investigations, the crime was “articulated” by the victim’s daughter, who, with the help of a false seer, pretended to be terminally ill, assuring that she would only have a few days to live.

“Because she has a mystical side and a daughter who has been facing psychological problems since adolescence, the old woman was convinced, even by her own daughter, to make the requested payments for the proposed spiritual treatment,” the police said in a statement.

The scams, which began in January 2020, turned into extortion when the old woman discovered the false seer and her daughter fired the domestic workers to isolate her.