Stolen 10th Century Gospel Returns to Greek Monastery from the US 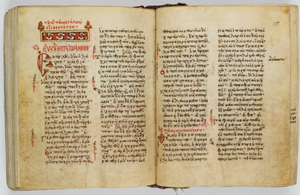 A manuscript of the Gospel (late 10th to early 11th century) of the Patriarchal and Stavropegic Monastery of Eikosifoinissa, with tax code 220, which was stolen by Bulgarian soldiers in March 1917, during the First World War, along with 430 other manuscripts and 470 ecclesiastical objects, is to be returned, after more than a century, to the historic Monastery of Drama. The manuscript has belonged to the private collection of the Museum of the Bible since 2014, when the museum was founded, and was recently identified by a museum curator. After this development, Mr. Jeffrey Kloha, Head Curator of the Museum of the Bible, on June 20, 2020 addressed a letter to His All-Holiness Ecumenical Patriarch Bartholomew, in which he informed him that in the context of the collaboration of this Museum with the Ecumenical Patriarchate, it had been decided to return the manuscript to the Monastery of Eikosifoinissa.

His All-Holiness, in a Patriarchal Letter sent to Mr. Jeffrey Kloha on August 31, 2020, thanked him for this action, stating that it was an act of restoration of the legal cultural heritage of the Patriarchal and Stavropegic Monastery of Panagia Eikosifoinissa. Among other things, he emphasized that “it is a real blessing for the monastic fraternity and the Christian world to see the religious treasures which were removed from the Monastery officially return to their natural space and be used for the spiritual edification of the faithful, as well as by scholars of history and art.” The Ecumenical Patriarch praised the decision of the Museum of the Bible to return the manuscript of the Gospel, in the context of its wider collaboration with the Ecumenical Patriarchate, noting that as an act it is exemplary and encourages the repatriation of the remaining ecclesiastical items to their natural mother, namely the Monastery.

On October 16, 2020, the Museum of the Bible officially announced its decision to return Evangelistariou 220 of the Eikosifoinissa Monastery. Prior to its return, the manuscript will be exhibited in a special exhibit of the Museum, along with three other biblical manuscripts of the same period, namely: a) a Psalter from the 11th century, b) a Gospel from the 12th century, and c) an Acts of the Apostles from the 12th century, which will be borrowed from the Patriarchal and Stavropegic Monastery of Zavorda of Saint Nikanor, for the temporary exhibition that will be inaugurated by His All-Holiness during his scheduled official visit to the USA in October 2021.