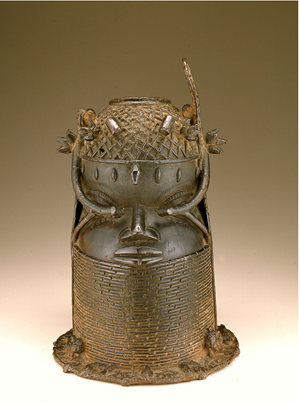 The Smithsonian’s National Museum of African Art transferred ownership of 29 Benin bronzes to the National Commission for Museums and Monuments in Nigeria. The bronzes, which were part of the museum’s collection, were stolen from Nigeria during the 1897 British raid on Benin City.

The Smithsonian’s National Museum of African Art transferred ownership of 29 Benin bronzes to the National Commission for Museums and Monuments in Nigeria. The bronzes, which were part of the museum’s collection, were stolen from Nigeria during the 1897 British raid on Benin City. The Smithsonian’s Board of Regents voted to deaccession the bronzes in June in keeping with the Smithsonian’s new ethical returns policy.

The transfer of ownership was formalized in a ceremony at the National Museum of African Art Tuesday, Oct. 11. The ceremony was held in conjunction with the National Gallery of Art, which returned the Benin bronze from its collection.

“Not only was returning ownership of these magnificent artifacts to their rightful home the right thing to do, it also demonstrates how we all benefit from cultural institutions making ethical choices,” said Lonnie Bunch, Secretary of the Smithsonian. “Sharing knowledge and stewardship with origin communities will help us better understand and preserve important cultural heritage like the Benin bronzes and illuminate it for future generations in the United States and around the world.”

“Nigeria is immensely gratified at the commendable decision of the Smithsonian’s National Museum of African Art, the National Gallery of Art and the Rhode Island School of Design to return these artefacts that left Africa over a century ago,” Mohammed said. “Nigeria looks forward to working with these institutions on joint exhibitions and other educational exchanges. By returning the artefacts, these institutions are together writing new pages in history. Their brave decision to return the timeless artworks is worth emulating.”

The return of these Benin Bronzes is the first return under the Smithsonian’s new ethical returns policy announced this spring. This policy authorizes Smithsonian museums to return collections to the community of origin based on ethical considerations, such as the manner and circumstances in which the items were originally acquired.

In addition to the National Museum of African Art’s collection, the Smithsonian’s National Museum of Natural History has a collection of 20 Benin bronzes. Provenance research for that collection has been undertaken and will be submitted to the Board of Regents as a request to deaccession bronzes obtained during the 1897 expedition and return them to Nigeria.

About the Benin Bronzes
The Kingdom of Benin, home of the Edo peoples, is located in the southwest tropical forest and mangroves region of present-day Nigeria. The Kingdom of Benin is renowned for the exceptional quality and diversity of its royal arts fashioned in copper alloy, ivory, terracotta, wood, iron and coral beads. In 1897 during a British raid on Benin, the royal palace was burned and looted, and the oba (ruler) was exiled. The British confiscated all royal treasures, giving some to individual officers and taking most to auction in London. The estimated 3,000 objects eventually made their way into museums and private collections around the world.

The collection of the National Museum of African Art includes 39 artworks from Nigeria attributed as Benin Kingdom court style. The majority of these artworks are dated, based on style, from the late 15th or early 16th century through the late 19th century. A 2021 provenance evaluation of the collection determined that 29 artworks were removed during the 1897 raid. There are six additional bronzes that require more research to understand their origin. The Benin bronzes entered the museum’s collection through purchase, transfer, donation and bequest. Twenty pieces were transferred from the Smithsonian’s Hirshhorn Museum and Sculpture Garden. The donor, Joseph H. Hirshhorn, had acquired the works through private dealers and auctions.