Scraping The Dirt Off The ‘Crime Of The Century’ 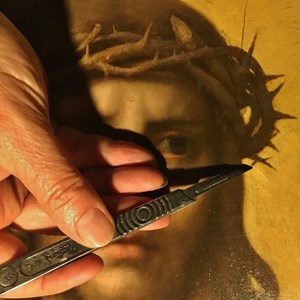 Described as the ‘Crime of the Century’, a series of paintings, all with a common source, have been sold for millions as Old Master masterpieces before being controversially downgraded to the status of modern fakes.

It has been described as the ‘Crime of the Century’: a series of paintings, all with a common source, sold for millions as Old Master masterpieces before being controversially downgraded to the status of modern fakes.

And it is also one of the 21st century’s greatest  mysteries: why, after a criminal investigation lasting over five years, has no one been brought to trial? Now, at last, the full story of this ‘riddle wrapped in a mystery inside an enigma’ is laid bare – in all its enthralling complexity – by Simon Hewitt, whose 2018 exposé of Russian Avant-Garde forgeries at Ghent Fine Arts Museum led to the exhibition’s closure and the sacking of the museum’s director.

Click here to read all about the schemes and adventuring of the affair’s chief protagonists. Who are these men ‘of lust, greed and glory’? Rip off the masks and let’s see.

By Simon Hewitt
Simon studied History of Art at Oxford University under Francis Haskell before moving to France in 1985 as Paris correspondent for Antiques Trade Gazette and Art+Auction. Since 2008 he has worked as an investigative journalist based in Switzerland and Budapest – his 2018 Art Newspaper exposé of a fake Russian Avant-Garde exhibition in Ghent led to the sacking of the museum director – and pursuing a journalistic and curatorial interest in the contemporary art scene in Central and Eastern Europe. He has also written about wine, travel, soccer and classical music, while his photographs have been the subject of gallery shows. His work Leonardo da Vinci and The Book of Doom, exploring the art of illumination in Renaissance Milan, will be published in October 2019.