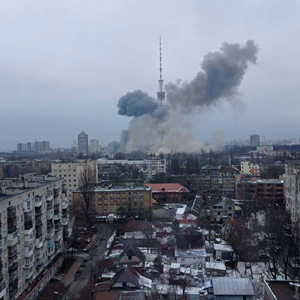 BYHMC Advisory Board Chair Natan Sharanksy: “Putin seeks to distort and manipulate the Holocaust to justify an illegal invasion of a sovereign democratic country is utterly abhorrent...

“Putin seeks to distort and manipulate the Holocaust to justify an illegal invasion of a sovereign democratic country is utterly abhorrent. It is symbolic that he starts attacking Kyiv by bombing the site of the Babyn Yar, the biggest of Nazi massacre.

We, at the Babyn Yar Holocaust Memorial Center, built on Europe’s largest mass grave of the Holocaust, work to preserve historical memory following decades of Soviet suppression of historical truth, so that the evils of the past can never be repeated. We must not allow the truth to - once again - become the victim of war.”

Before the attack on Babyn Yar this afternoon, the leadership of the Babyn Yar Holocaust Memorial Center in the Ukrainian capital, Kyiv, issued a strong condemnation of Russian President Vladimir Putin’s use of language related to the Holocaust, and loudly condemned the country’s aggression against Ukraine, pledging to document and submit war crimes committed by Russian forces to the International Court of Justice in the Hague.

The statement was signed by Maksym Rabinovich, CEO, Ilya Khrzhanovsky, Artistic Director, Ruslan Kavatsiuk, Deputy CEO, and Oleksiy Makukhin, Executive Director, of the Babyn Yar Holocaust Memorial Center. They noted, “As experts who work with Holocaust research and commemoration, we are deeply outraged that the aggressor country has used genocidal rhetoric to justify its shameful actions. Russia has vulgarly instrumentalized anti-Nazi rhetoric and is trying to take on the role of a fighter against Nazism.”

The statement continued, “We remind the Russian leadership that Kyiv, Kharkiv, Kherson, Mariupol and other Ukrainian cities were last subjected to massive bombing by Nazi Germany during World War II, now they are burning under the blows of Putin's army, under the false and outrageous narrative of "denazifying" Ukraine and its people.”

The signatories went on to pledge, “As experts in research on crimes against humanity, we will thoroughly collect and record evidence of crimes against humanity committed by the Russian aggressors. We will create a database for the UN International Court of Justice in The Hague. Our Academic Council has already addressed a letter to the Prosecutor of the International Criminal Court. Only a principled position and joint action can defeat evil.”

In an open letter sent today to Mr. Karim A. A. Khan QC, Prosecutor of the International Criminal Court, by BYHMC academic council, headed by lifelong genocide researcher, Father Patrick Desbios, they noted: "President Putin accused Ukraine of committing genocide against the Donbass inhabitants. As an expert in both the field and region, I want to certify that after close examination of the facts and reports, there has not been a single trace of the crimes qualified as genocide since 2014.