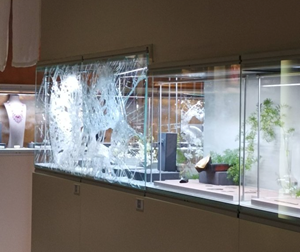 There has been a robbery at the TEFAF art fair in Maastricht. The art fair is being vacated, police said.

There has been a robbery at the TEFAF art fair in Maastricht. The art fair is being vacated, police said. Four men of robbers entered the exhibition floor in event hall MECC, where one of them started to smash into a display case with a sledgehammer.

An eyewitnesses saw four armed men with at least one gun and an ax, enter the art fair. According to the witnesses, they failed to break the cases open and fled the scene. The display cases are said to have contained diamonds from a London jeweler. As far as it is known, no one got hurt or injured.

A video shows the robbers putting something in a bag and then running away. The robbers fled. The police are looking for them and are currently investigating the case.