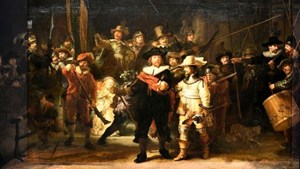 The Night Watch has been removed from its usual position on the wall and placed at the front of the transparent glass chamber.

According to a recent press release by the Rijksmuseum, the Night Watch has been removed from its usual position on the wall and placed at the front of the transparent glass chamber. This event marks the start of the final stage of the research phase of Operation Night Watch, the largest ever project devoted to the examination and restoration of Rembrandt’s masterpiece. The Night Watch has now been secured in a specially designed holder so that the Rijksmuseum researchers can study the back of this enormous painting.

Visitors can now come closer to The Night Watch than ever before and it offers a rare opportunity to view the rear of The Night Watch, which will remain on display in this way until 23 November 2021.

Taco Dibbits: Whenever you remove any painting from the wall and its frame, it suddenly looks very vulnerable. This applies equally to The Night Watch, which is just a few centimetres thick. You see the canvas and the timber framework, and they seem so very fragile. All this does mean it’s absolutely thrilling to see the back of the painting, something that is normally impossible. 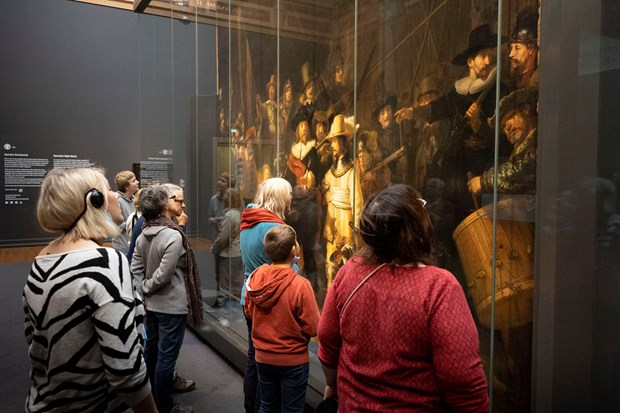 In the first week of November, shearography analysis will be carried out to increase understanding of the extent to which the 46-year-old support canvas is affixed to the original 17th-century canvas on which Rembrandt painted The Night Watch, and to determine whether the bonding between the two canvases is still adequate. This procedure will be conducted in partnership with scientists from Delft University of Technology.

In the second week of November, the researchers will conduct a naked-eye study of the rear of the painting, with the aid of the stereoscopic microscope. During the evenings, they will use a Macro XRF scanner to study the back of the painting, with the aim of adding to existing knowledge about the undermost layers of paint. Once these analyses are complete, on 23 November The Night Watch will be rehung in its original position. The researchers will then carry out tests to determine the best approach to removing the thick overpainting at the edges of The Night Watch. The completion of this work will mark the start of the actual restoration of the painting. More news on this to be announced around mid-December

AkzoNobel is the main partner of Operation Night Watch.

The Rijksmuseum is grateful for all forms of support it receives. More than ever, it is clear that government subsidies, corporate contributions and support from funds, as well as donations, legacies and Friends are, and will remain, essential to the Rijksmuseum.