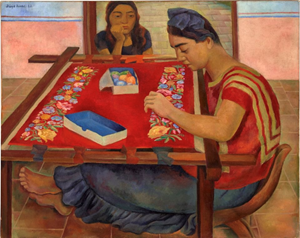 The Museum of Fine Arts, Houston, has acquired a major, rediscovered painting by the great Mexican muralist Diego Rivera (1886–1957). The 1928 painting La Bordadora (The Embroiderer) had been in the collection of a New Orleans family since they acquired it, shortly after the work was completed.

The Museum of Fine Arts, Houston, has acquired a major, rediscovered painting by the great Mexican muralist Diego Rivera (1886–1957). The 1928 painting La Bordadora (The Embroiderer) had been in the collection of a New Orleans family since they acquired it, shortly after the work was completed. It has not previously been on public view.

“I am thrilled to announce the acquisition of this remarkable painting,” said Gary Tinterow, Director and Margaret Alkek Williams Chair of the Museum of Fine Arts, Houston. “La Bordadora relates thematically and stylistically to a beautiful Rivera cartoon already in the MFAH collection, from his iconic mural cycle at the Ministry of Education in Mexico City. Both La Bordadora and the ministry murals herald a fundamental theme of Rivera’s life’s work, to capture the dignity of the everyday. With this acquisition, we will be able to build on the foundations of our extraordinary holdings of 20th-century Latin American art to tell the story of Modernism from its earliest chapters.”

Rivera had gone to the region of Tehuantepec, near Oaxaca, Mexico, in 1923, and there discovered the vibrant, indigenous culture of Mexico, with its traditions passed down by women through generations. He created drawings as well as a few paintings of weavers and artisans. La Bordadora depicts two women in an abstracted interior at a table, with the woman in the foreground working on an embroidery panel.

The painting was acquired in 1928 or 1929 by James Kern Feibleman, a New Orleans businessman, and later a professor, who had been involved in literary and artistic circles in the city that overlapped and interconnected with those in Mexico. A photograph of the painting taken by Tina Modotti was published in 1930 in the Paris journal Art Vivant, but the painting’s location remained unknown until recently.