A previously hidden sketch has been discovered during examinations of Rembrandt’s The Night Watch.This allows us to look over the artist’s shoulder, as it were, and watch as he takes the first steps in the making of a masterpiece.

A previously hidden sketch has been discovered during examinations of Rembrandt’s The Night Watch. This allows us to look over the artist’s shoulder, as it were, and watch as he takes the first steps in the making of a masterpiece. The team of Operation Night Watch researchers have been working at the Rijksmuseum for the past two-and-a-half years, meticulously mapping The Night Watch using the most advanced imaging techniques and computer technology. Their work has produced an unprecedented volume of data that offers a vastly improved understanding of the creation process and the painting's current condition.

“The discovery of the sketch represents a breakthrough in this research. We always suspected Rembrandt must have made a sketch on the canvas before embarking on this incredibly complex composition, but we did not have the evidence. We are currently able to look beneath the surface of the paint better than ever before and now we have the proof, giving us a real understanding for the first time of how the painting was made. It is fascinating to see Rembrandt searching for the right composition. We have discovered the genesis of The Night Watch.” – Taco Dibbits, Director of the Rijksmuseum. 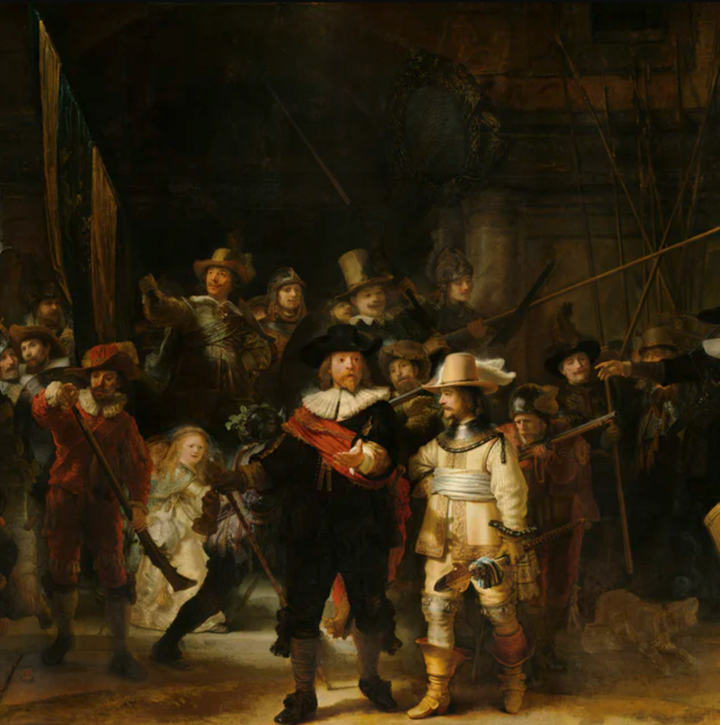 The underpainted sketch corresponds with our understanding of Rembrandt's spontaneous approach to composing directly on the canvas itself. This discovery was only possible because new technologies allow us to look through the layers of paint with greater specificity than ever before and analyse in minute detail the materials that Rembrandt used. The artist applied a brown ‘quarts’ ground and used a beige paint with a high chalk content for his rough sketch. To date, no other paintings by Rembrandt have been discovered that were prepared using this type of paint.

“Each new detain gives us another insight into Rembrandt’s creative process: His original idea, his thought processes and his material and artistic choices. An all-encompassing approach such as this would have been impossible even a few years ago, which means Operation Night Watch is setting new standard for the study of painting. All these discoveries now prompt us to look at Rembrandt’s other paintings with different eyes – We now know what we should be looking for.” - Petria Noble, the Rijksmuseum’s Head of Paintings Conservation

Petria Noble, the Rijksmuseum’s Head of Paintings Conservation: Each new detail gives us another insight into Rembrandt’s creative process: his original idea, his thought processes and his material and artistic choices. An all-encompassing approach such as this would have been impossible even a few years ago, which means Operation Night Watch is setting a new standard for the study of painting. All these discoveries now prompt us to look at Rembrandt’s other paintings with different eyes – we now know what we should be looking for.

Rembrandt must have spent a considerable time in his search for the ideal composition for this large painting. Previous studies of The Night Watch had already revealed dozens of pentimenti, or modifications made by the artist himself. Now, using the latest imaging techniques, we have discovered even more changes. We can see, for example, that Rembrandt originally painted feathers for the helmet of militiaman Claes van Cruijsbergen, but later painted them over. The artist also adjusted the leg position of Rombout Kemp – the many scans revealed that the leg initially was painted in a different position at an earlier stage. There are also indications of the presence of an additional sword between the captain and the lieutenant and it has become clear that Rembrandt originally indicated have a larger number of spears projecting above of company.

The Condition of the Night Watch

As well as providing an understanding of Rembrandt’s working methods, this detailed examination of The Night Watch has shed a great deal of light on the condition of the painting. In many areas the paint is still in an excellent state, an example being the richly decorated coat of Willem van Ruytenburch. Other areas, however, are in poor repair, partly as a result of the many treatments The Night Watch has undergone since the 17th century – it is more than likely, for example, that the removal of varnish in the past led to the dissolving of paint at some locations.

Joining forces with experts from AkzoNobel, the main partner of Operation Night Watch, made it possible to unravel mysteries such as those surrounding Rembrandt’s celebrated impasto technique. Impasto involves the application of thick paint on the canvas to achieve a striking three-dimensional structure that reflects the light in a unique way. We have succeeded for the first time in replicating Rembrandt’s impasto paint by systematically testing variations of paint formulas using the ingredients that were available to Rembrandt, such as white lead, linseed oil and egg white.

One of the areas showing signs of deterioration centres on the dog. The prevailing theory at the start of Operation Night Watch was that the white haze in the dog was caused by the formation of crystals in the paint. Extensive research has revealed, however, that attrition in this part of the painting has led to more exposure of the newly discovered light-coloured sketch, with the result that the contours of the dog are now much lighter than Rembrandt would have originally intended. 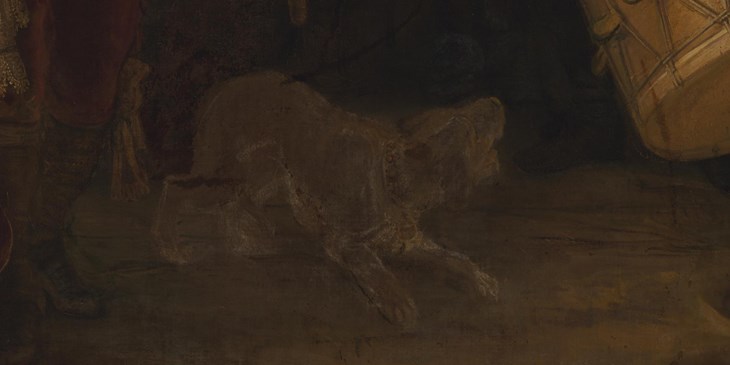 Another example of deterioration is the disappearance of the cloud of smoke behind the head of Banninck Cocq. The copy of The Night Watch attributed to Gerrit Lundens clearly shows a plume of smoke resulting from the firing of a musket, but only traces of it remain in The Night Watch. Other areas of the canvas displaying signs of wear include the costume of Frans Banninck Cocq, which now lacks detail, and the face of the musketeer to his left dressed in red, Jan van der Heede, where the tops of the canvas fibres have become exposed.

Research has shown that the colour was originally more vivid in some parts of The Night Watch: the areas where Rembrandt used smalt, a pigment made from glass containing cobalt, were initially a more intense in colour, for example. This discolouration is the result of a natural process of degradation and unfortunately is irreversible. In some places, layers of older varnish applied in the past have caused a grey haze, and some of the old retouching carried out after Rembrandt’s time has also become discoloured.

Over the centuries, thousands of minuscule white spots known as lead soaps have developed in the paint. They are not uncommon in 17th-century paintings such as The Night Watch. In some cases the lead soaps have fallen out of the painting or were removed during later restorations. The resultant tiny holes in the paint are visible in areas such as the face of Frans Banninck Cocq.

Anyone looking at The Night Watch today will notice several clearly defined ripples in the upper left corner of the canvas. These deformations, as they are known, developed at the beginning of this century when the painting was hung in the Phillips Wing during the refurbishment of the main museum building. They are probably the result of excessive climatic fluctuations in the gallery during this period. These deformations need to be addressed, and can be remedied without any danger to the painting. The treatment will therefore begin on 19 January 2022, when The Night Watch will be onto a new strainer. Once this process is complete, we will take a phased approach to deciding whether other conservation treatment should be carried out.