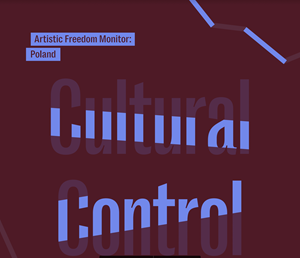 While Poland’s transition to democratic rule offered hope in the form of constitutional, legislative, and institutional changes, the rise of illiberalism has reversed many of these reforms and acutely affected the arts and cultural sector in the country.

While Poland’s transition to democratic rule offered hope in the form of constitutional, legislative, and institutional changes, the rise of illiberalism has reversed many of these reforms and acutely affected the arts and cultural sector in the country. According to a new report released today by Artistic Freedom Initiative, Poland’s populist government, led by the Law and Justice party (Prawo i Sprawiedliwość; PiS), has actively reshaped Poland’s arts and cultural landscape in order to advance right-wing, nationalist narratives. In the process, the right to free artistic expression has been seriously hampered and many artists have been compelled to either conform with PiS’ agenda or suffer professionally.

AFI’s report, “Cultural Control: Censorship and Suppression of the Arts in Poland,” provides an analysis of PiS’s strategy to stack the country’s museums, theaters, media outlets, and cultural institutes with party loyalists to promote its nationalist political vision and strategically crowd out opposition voices from the nation’s most influential arts and cultural institutions. In addition to politicizing the country’s Ministry of Culture and National History, the report finds that PiS has abused the Polish justice system to intimidate artists and censor creative expression that contradicts the Polish Catholic Church or the nation’s image. The report identifies and outlines PiS’s tools of systematic artistic suppression including:

The report focuses in large part on the administrative restructuring of Poland's arts and cultural institutions in order to more closely reflect the Party’s socially conservative agenda, an integral pillar of PiS’s campaign. Over the last seven years, the Minister of Culture has upended the customary practice of using merit-based hiring processes to select the directors of national museums and cultural institutions and elected to directly appoint management based on political affiliation. The report calls attention to PiS’s managerial interferences into 23 major Polish arts and culture institutions and artistic events from 2015 to present.

“PiS is well-aware that it is obligated under international law to uphold the right to free artistic expression; however, by installing right-wing directors into major arts and cultural institutions, it can control artistic production without appearing as if they are engaged in censorship,” said AFI’s co-Executive Director Sanjay Sethi.

The PiS-led government has also commandeered the justice system in restricting artistic expression by regularly employing Poland’s Blasphemy law, Article 196 of the country’s Penal Code, to punish creative acts capable of harming the sanctity of the Catholic Church. While many European countries have long repealed similar legislation, the number of arrests and charges for a violation of Article 196 has increased sharply under PiS rule. One Polish artist, Elżbieta Podleśna, was arrested for blasphemy in May 2019 for distributing a work of art depicting the Virgin Mary with her halo painted in the rainbow colors of the LGBTQ+ pride flag. Further articles in the Penal Code criminalize defamation of the Polish nation, the President of Poland, national symbols and public officials.

“PiS recognizes and takes advantage of legal intimidation as a powerful deterrent force. Even if legal claims made against artists are ultimately unsubstantiated, they are nonetheless effective in undermining artists' financial situations, professional reputations, and career opportunities,” said AFI’s Human Rights Research Officer Johanna Bankston. “In PiS’ Poland, artists understand that exercising their ‘right to free artistic expression’ may come at a steep price.”

Poland’s conservative media also contribute to the marginalization of artists. A majority of media channels in Poland have been nationalized or purchased by PiS affiliates, a process that has allowed conservative and nationalist narratives to dominate the media. . According to the report, PiS-controlled and affiliated media have gone to great lengths to publicly denigrate the work of artists that challenge the nationalist cultural narrative.

PiS’s divisive rhetoric has also emboldened ultra-conservative, non-State actors in Poland to act as party watchdogs, monitoring expressions that could subvert party values. As the report outlines, these groups possess a zealous commitment to Polish nationalism, the Catholic Church, and hostility towards minorities, feminists, and members of the LGBTQ+ community.

The report includes pointed recommendations to the Polish government and EU legislators, including an appeal to ensure that all legislation and state practices are in accordance with international and EU obligations, particularly the Charter of Fundamental Rights of the European Union and the European Convention on Human Rights. The report also calls for the repeal of the “blasphemy law” as well as the decriminalisation of the defamation law and the repeal of Poland’s Holocaust law, which outlaws assigning any responsibility to Poland or its citizens for crimes committed during the Holocaust.

AFI urges Poland to guarantee that the rights of all artists and arts organisations are promoted, respected and protected. This can be achieved through legislative and policy changes that ensure the politically neutral and independent management of national and regional arts and cultural institutions. The report recommends that Poland establishes a policy of open competition and merit-based hiring practices for roles in all arts and cultural institutions by making candidates’ applications for the position public and standardizing independent hiring committees. These recommendations will help bring about a more diverse and thriving cultural sphere in Poland.

AFI researched the relevant laws, policies, practices, and events which have shaped the artistic environment in the country in the past decade in order to draw analytical conclusions and provide comprehensive recommendations regarding the state of artistic freedom in Poland. A variety of resources in both English and Polish were consulted, including human rights reports, legal databases, policy briefs, news articles and other media. The findings were also reviewed by legal and policy experts in the field. Interviews were conducted with key participants who were identified through the research process. Participants were selected for their involvement and expertise in the arts and culture sphere and were asked to speak to the lived experiences of artists and cultural workers in Poland. This report is the second installment of the Artistic Freedom Monitor, an ongoing series of country-by-country human rights reports with a specific focus on freedom of artistic expression.