Picasso’s Iconic ‘Guernica’ Tapestry Back at the United Nations 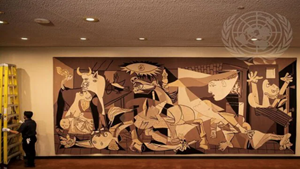 The iconic tapestry of Pablo Picasso’s “Guernica,” which is considered by numerous art critics as perhaps the most powerful anti-war painting in history, returned to its place of honor at the United Nations.

The iconic tapestry of Pablo Picasso’s “Guernica,” which is considered by numerous art critics as perhaps the most powerful anti-war painting in history, returned to its place of honor at the United Nations on Saturday after a year-long absence that angered and dismayed many UN diplomats and staff.

The tapestry of the painting, woven by Atelier J. de la Baume-Durrbach, was re-hung Saturday outside the Security Council, the UN’s most powerful body charged with ensuring international peace and security. Since February 2021, the yellow wall where it had hung had been empty.

The tapestry was commissioned in 1955 by former US vice president and New York governor Nelson Rockefeller and offered to the UN on loan in 1984.

The Rockefeller family donated the land to build the UN complex after the world body was founded on the ashes of World War II, in the words of the UN Charter, “to save succeeding generations from the scourge of war.”

When the United Nations headquarters was undergoing a major renovation starting in 2009, the tapestry was returned to the Rockefeller Foundation for safekeeping. It was reinstalled in September 2013 when the renovations were completed.

Early last year, Nelson A. Rockefeller, Jr., the son of the late vice president and governor who owns the “Guernica” tapestry, notified the United Nations of his intention to retrieve it. The UN returned it to him in February 2021.

Rockefeller said in a statement Saturday that the tapestry was being returned on loan to the United Nations, and he intends to donate the work to the National Trust for Historic Preservation in the future.

“The Guernica tapestry with its probing symbolism -- its depiction of horrific aspects of human nature -- wrestles with the cruelty, darkness, and also a seed of hope within humanity.” Rockefeller said in a statement. “The Guernica tapestry is meant to be experienced and interpreted, with Picasso refusing to share its message when asked.”

Rockefeller said he was “delighted and deeply grateful, along with my family for the careful stewardship” of the tapestry by the United Nations and Secretary-General Antonio Guterres.

“I am grateful that the tapestry will be able to continue to reach a broader segment of the world’s population and magnify its ability to touch lives and educate,” he said.

In a Dec. 1, 2021 letter to Rockefeller, the UN said Guterres wrote: “This is most welcome news as we end a difficult year of global hardship and strife.”

“The Guernica tapestry speaks to the world about the urgent need to advance international peace and security,” the UN chief wrote. “We are honored to serve as careful stewards of this one-of-a-kind iconic work – as we draw inspiration from its message.”

The original painting, Picasso’s protest of the bombing of the Basque capital of Guernica during the Spanish civil war, is in Spain.