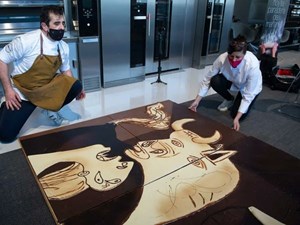 Chocolatiers hailing from the Basque Country in Spain recreated the famous painting 'Guernica' that was created by renowned artist, Pablo Picasso to celebrate their heritage.

Chocolatiers hailing from the Basque Country in Spain recreated the famous painting 'Guernica' that was created by renowned artist, Pablo Picasso to celebrate their heritage. Guernica' was created by the artist to depict the plight of the people during the bombings carried out by the Nazi warplanes in 1937, during the Spanish Civil War.

A local association named 'Euskal Gozogileak' made the tragic masterpiece as they collaborated with a group of chocolatiers who made recreated the painting with chocolate of different colors. This will be presented on the 85th anniversary of the bombing of the Basque town named Guernica before the Second World War.

This was not an easy task for the chocolatiers due to the massive size of the painting. However, the work was completed using 14 separate chocolate slabs.

The final result will be shown in several locations, including in the town of Guernica.