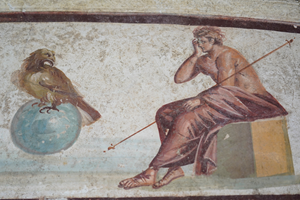 Manhattan District Attorney Alvin L. Bragg, Jr. announced the return of 142 antiquities valued at nearly $14 million to the people of Italy. In December 2021, the Manhattan D.A.’s Office concluded a multi-year, multi-national criminal investigation into MICHAEL STEINHARDT, one of the world’s largest ancient art collectors, seizing 180 stolen antiquities valued at $70 million and imposing a first-of-its-kind lifetime ban on acquiring antiquities. Of the 142 objects returned today, 60 were recovered from Royal-Athena Galleries, 48 were recovered from STEINHARDT, and an additional 34 were seized pursuant to other ongoing investigations. All the antiquities were returned during a repatriation ceremony attended by Italy’s Consul General Fabrizio Di Michele, General Roberto Riccardi of the Carabinieri’s Command for the Protection of Cultural Heritage, and U.S. Homeland Security Investigations (“HSI”) New York Acting Deputy Special Agent-in-Charge Marina Vides.

“Though the pieces being repatriated today have a written price tag of millions of dollars, the historical, artistic, and cultural values attached to each of the relics are immeasurable and priceless. These artifacts deserve a place in their homeland, where the people of Italy can jointly appreciate the marvels of their country’s past,” said District Attorney Bragg. “There are far too many important cultural artifacts being illegally looted and trafficked across the globe, and we will continue to conduct these investigations in coordination with our law enforcement partners.”

“The repatriation of these 142 masterpieces, previously stolen or looted in Italy, is very important for our Country” said Fabrizio Di Michele, Consul General of Italy. “It is, once again, a testimony to the fruitful cooperation between the Italian and US authorities, and notably between the New York County District Attorney’s Office, the Homeland Security Investigations, and the Carabinieri’s Comando Tutela Patrimonio Culturale. I am particularly grateful to District Attorney Alvin Bragg and to his outstanding team for their steadfast commitment. I would like to convey to them the utmost appreciation of the Italian Government for their endeavors to ensure the return of these precious antiquities to where they belong,” said Consul General Di Michele.

“We join our partners in returning these ancient artifacts, some of which were crafted at the very beginnings of civilization, to the people of Italy. Thieves and so called ‘collectors’ attempted to loot and smuggle these items, to hold them in private collections or to sell them for an ill-gained profit. Those who plunder these artifacts are not only stealing relics of the past, but they are stealing from our future by depriving our children of the chance to appreciate the history and artistry of those who came before them,” said Homeland Security Investigations (HSI) New York Acting Special Agent in Charge Ricky J. Patel. “HSI is proud to work alongside our partners, both here in New York and around the world, to track down these priceless artifacts and ensure they are returned to the rightful people.”

Among the items being repatriated today is the Ercolano Fresco, which was seized as part of the investigation into STEINHARDT. Depicting an infant Hercules strangling a snake, the piece dates to 50 C.E. and was looted in 1995 from a villa in Herculaneum, an archaeological site that was buried for millennia under volcanic ash from the fiery eruption of Mount Vesuvius. STEINHARDT purchased the Ercolano in 1995 for $650,000 with no verifiable prior provenance. It is currently valued at $1,000,000.

Along with the Ercolano Fresco, the Manhattan D.A.’s Office repatriated 141 other antiquities, including:

District Attorney Bragg would also like to thank Indiana University’s Eskenazi Museum of Art, the Museum of Fine Arts-Boston, Royal-Athena Galleries, and the Toledo Museum of Art for their assistance and cooperation with this investigation.