New Fragments from the Parthenon at the Acropolis Museum 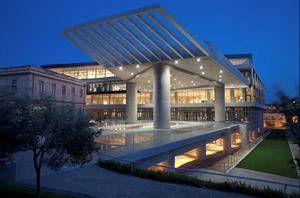 The Acropolis Museum received ten fragments of the sculptural decoration of the Parthenon, which were granted by the National Archaeological Museum, following a request made by the Acropolis Museum General Director. These fragments, which were kept until now in the storerooms of the National Archaeological Museum, have a maximum height of 32 centimeters, and were located, identified and documented by the late archaeologist and researcher of ancient Greek sculpture, Giorgos Despinis. The fragments come from the frieze, the metopes and the pediments of the Parthenon.

Two head fragments already found their place in the frieze. The first one, the upper part of a youth’s head, comes from the east frieze. It connects to the second from the left figure of a parade marshal of the Panathenaic procession, who is depicted on block VII. This fragment is the only authentic fragment of the block VII of the east frieze, as the rest of the block is kept in the Louvre Museum in Paris. The second head is attributed to the first from the left figure of a thallophoros (branchbearer) of the Panathenaic procession, who is depicted on block IX of the north frieze. The remaining eight fragments were temporarily placed in a special showcase in the Parthenon Gallery, from which they will be withdrawn at some point, to be studied in relation to other parts of the sculptural decoration of the great temple, whether these are displayed in the exhibition space, or kept in the Acropolis Museum’s storerooms.

The receipt of the ten fragments from the National Archaeological Museum to the Acropolis Museum took place in an official ceremony in the emblematic Parthenon Gallery, presence of the Prime Minister, Mr. Kyriakos Mitsotakis, the Minister of Culture, Mrs. Lina Mendoni, the General Secretary of Culture, Mr. George Didaskalou, the President of the Board of Directors of the Acropolis Museum, Prof. Dimitris Pandermalis, the Director of the National Archaeological Museum, Mrs Anna Karapanagiotou, and the General Director of the Acropolis Museum, Prof. Nikos Stampolidis.