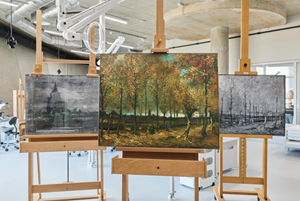 The Europe Fine Art Foundation (TEFAF) has announced that the Museum Boijmans Van Beuningen in Rotterdam is to be a recipient of the TEFAF Museum Restoration Fund,

The Europe Fine Art Foundation (TEFAF) has announced that the Museum Boijmans Van Beuningen in Rotterdam is to be a recipient of the TEFAF Museum Restoration Fund, a grant program created 10 years ago in support of the international art community’s vital work to preserve artistic and cultural heritage. The work being restored is Populierenlaan bij Nuenen (Poplars near Nuenen), 1885, oil on canvas, 78 x 98 cm, by Vincent van Gogh.

To celebrate the 10-year anniversary of the TEFAF’s Museum Restoration Fund, for the first time ever, the recipient’s work of art will be shown, pre-restoration, at TEFAF Maastricht during the run of the fair. A dedicated space at the fair will be designed to showcase this work by Van Gogh. Later in summer 2022, the restoration project will start at the Boijmans Depot, where visitors are able to follow the restoration project.

The TMRF 10th Anniversary celebrations, including the presentation of the Van Gogh at the Maastricht fair and dedicated TEFAF Talks in collaboration with ICOM-CC, are supported by Aon, the TMRF Anniversary Supporting Partner.

In 1903, the painting Populierenlaan bij Nuenen (Poplars near Nuenen), 1885, oil on canvas, 78 x 98 cm, by Vincent van Gogh was the first work by the artist to enter a public museum collection. It was donated by 26 art friends of the Museum. Van Gogh painted the work in Nuenen in 1885 and is believed to have added further touches of paint to the work in Paris, giving the work an important place in the artist’s oeuvre.

After almost 140 years the work is in need of restoration. The paint layers are unstable, an issue partly caused because Van Gogh painted the work on top of another painting, which has caused problems with adhesion. As such the restoration process will focus on consolidating the loose paint and possibly removing the varnish.

The process is being led and overseen by painter conservator Erika Smeenk-Metz. Currently the museum is conducting technical research into the materials used working in partnership with specialists from the Rijksdienst voor het Cultureel Erfgoed (Cultural Heritage Agency) and the Van Gogh Museum. The central question is whether the varnish can be removed without damaging the original paint layers, which would improve the aesthetics of the painting. It will also allow for further investigation into the painting underneath the visible Populierenaan bij Nuenen – depicted underneath is a tower, presumed to be the Old Tower near Nuenen. By exploring these layers further, it is hoped to provide the first technical evidence that the lighter touches were added by Van Gogh after he took the painting with him to Paris.

Never before has research been possible in such depth and the museum hopes to discover beyond doubt how much of the painting was done in Paris, thus placing the work in a new light within Van Gogh’s stylistic development as an artist.

Sjarel Ex, Director Boijmans Van Beuningen, said “In addition to a new typology, Depot Boijmans Van Beuningen also offers a new instrument for caring for the extensive and diverse collection in Rotterdam. We are delighted with the support from TEFAF and extremely grateful that The Museum Restoration Fund puts the care for art and heritage worldwide in the spotlight and has been for a decade. As a place for conservation and research, the depot is ideally suited to offer this masterpiece the restoration it deserves.”

Over its 170-year history, the Museum Boijmans Van Beuningen has grown to include over 150,000 artefacts – 63,000 paintings, photographs, films, pre-industrial design and design objects, contemporary art installations and sculptures, as well as 88,000 prints and drawings. The collection offers a journey through the history of art, from the Middle Ages to the 21st century.

Hidde van Seggelen, Chairman of TEFAF commented, “The establishment of TEFAF’s Museum Restoration Fund has provided valuable investment into the preservation of important works of art around the world, reinforcing TEFAF’s commitment to scholarship and academia. It is befitting that, in this anniversary year, the fund has chosen to support the restoration of a Dutch masterpiece by one of the world’s best-known artists thereby preserving it for future generations of visitors to the Museum Boijmans Van Beuningen.”

Celebrating its 10th anniversary this year, the TEFAF Museum Restoration Fund supports the restoration and conservation of culturally significant works in museums and institutions worldwide. Museums and institutions that have attended TEFAF Maastricht or TEFAF New York are eligible to apply for the grants, which are awarded by an independent committee of experts.

The restoration fund’s committee is made up of the following international experts: