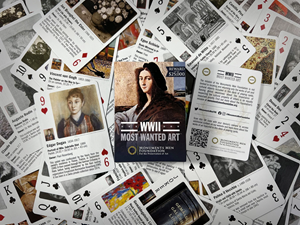 The Monuments Men Foundation for the Preservation of Art (Foundation) has launched a deck of playing cards featuring the WWII MOST WANTED ART™ still missing since the end of World War II.

The Monuments Men Foundation for the Preservation of Art (Foundation) has launched of a deck of playing cards featuring the WWII MOST WANTED ART™ still missing since the end of World War II. Determined to continue the mission of the Monuments Men and Women, the scholar-soldiers who, during World War II, protected and safeguarded civilization’s most important artistic cultural treasures, the Foundation is now engaging the public to help find missing objects and return them to their rightful owners.

The Foundation is offering a cash reward of up to $25,000 for information leading to the recovery of each cultural object included in the WWII MOST WANTED ART™ deck of playing cards. Terms and conditions for the reward are fully outlined on the Foundation’s website at monumentsmenfoundation.org/wwii-most-wanted.

Inspired by an idea of Foundation Trustee Mr. Kevin McGlone, and proudly printed in the U.S. by The United States Playing Card Company, the deck includes fifty-two works of art and two sets of historical photo albums featuring works confiscated and coveted by the Nazis and Adolf Hitler. Artistic cultural objects spanning the tenth through the twentieth centuries, and major European artists from various periods are represented in the deck. The Foundation worked with the owners of these objects as well as museums and law enforcement agencies to complete research into the circumstances of each loss.

“It is a very proud day for our Foundation team,” said president Anna Bottinelli. “After almost two years of work, we are pleased to have a new and exciting tool to aid in the location and recovery of missing works of art. Priceless works of art that have a tainted past are a liability. We hope this heightened visibility will incentivize those who have such objects to contact the Foundation about returning them to their rightful owners.”

“The looting, loss of life, and victimization of untold numbers of people before and during World War II were some of the darkest days in history,” said Randolph J. Deaton IV, Program Manager and Supervisory Special Agent, FBI Art Crime Program and Art Crime Team. “This new campaign by the Monuments Men Foundation will raise additional awareness of the art and cultural property stolen and lost during that era, and will assist law enforcement agencies around the world in efforts to reunite victims and their family members with their possessions. Protecting and assisting victims of crimes, even if those crimes occurred long ago, has and will always remain a priority of the Federal Bureau of Investigation.”

Customized decks of playing cards have a rich history in the United States military, having been used during the Civil War, World War II, and most recently the Iraq War, to bring visibility to a particular mission. This deck follows that tradition to bring visibility to some of the most important works of art that went missing during World War II whose whereabouts are currently unknown. “The Monuments Men Foundation has found a new and creative approach to engage the general public in the search for works of art and cultural treasures missing since World War II,” said Col. A. Scott DeJesse, program director for the 38G / 6V Heritage and Preservation branch, U.S. Army. “We are proud of our relationship with the Foundation and look forward to integrating this rich history with our future efforts to protect cultural heritage.”

General Roberto Riccardi, Chief of the Carabinieri Command for the Protection of Cultural Heritage, said: “The looting and destruction of art during conflicts is, unfortunately, a constant in history. In order for the world to finally turn the page, it is necessary to do justice to the past ... The Monuments Men of the Western Allied Coalition did a lot to help Italy save its treasures in that dramatic circumstance and today the Monuments Men Foundation, with whom we have an excellent collaboration, continues their work with commitment and passion. We hope that this new initiative will help bring home some of the still missing masterpieces.”