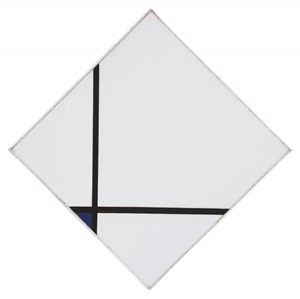 The heirs of Dutch artist Piet Mondrian claim that a nearly 100-year-old canvas by the De Stijl master currently in the collection of the Philadelphia Museum of Art (PMA) was stolen by the Nazis.

The heirs of Dutch artist Piet Mondrian claim that a nearly 100-year-old canvas by the De Stijl master currently in the collection of the Philadelphia Museum of Art (PMA) was stolen by the Nazis. Now, they’re suing to get the prized object back. The painting, Composition With Blue (1926), is worth more than $100 million, according to court documents.

A complaint was filed in Philadelphia on Friday by the trustees of the Connecticut-based Elizabeth McManus Holtzman Irrevocable Trust, the children of Elizabeth McManus Holtzman, and American painter Harry Holtzman, who sponsored Mondrian’s immigration to New York to escape Nazi persecution. After Mondrian’s death in 1944, Holtzman was named his executor and the sole heir to his estate.

The complaint states that Mondrian died four years after arriving in the United States, “unaware that he had any recourse to recover his prized painting. Similarly, Harry Holtzman also died without learning that Mondrian, and thus he, owned the painting.”

One of the trustees bringing the lawsuit, Madalena Holtzman, said in a statement to ARTnews that this “great work by Mondrian was seized by the Nazis. We are greatly disappointed that we have been compelled to take legal action to enforce our rights.”

The PMA has forcefully rejected the accusation that Composition was acquired illegitimately. Holtzman, who died in 1987, did not challenge the PMA’s ownership of the painting, officials said.

In a statement to ARTnews, the museum said it “fully supports restoring artwork looted by the Nazi regime to its rightful owners, and we have done so in the past.” However, “the private trust that is suing the Museum has no legitimate claim to Composition with Blue by Piet Mondrian. In fact, the painting was purchased by A.E. Gallatin, a friend of the painter’s, who, with Mondrian’s full knowledge and continuous support displayed it publicly. Mondrian even volunteered to restore the work for Gallatin and expressed great pleasure with Gallatin’s stewardship of the painting.”

The museum said it will “vigorously defend against this meritless claim.”

Last year, the Kunstmuseen Krefeld faced a similar lawsuit filed by the estate seeking the forfeiture of four of the artist’s paintings loaned to the German institution in 1929. The lawsuit also sought damages for four additional works that were allegedly sold in the 1950s to finance the acquisitions of works by Marc Chagall, Henri Matisse, and Pablo Picasso. According to the heirs, the works surfaced in storage in 1947, but the museum neither notified the estate nor promptly listed the paintings in its inventory.

The heirs publicly claimed ownership rights to the Krefeld group in 2018, according to a report in the New York Times. The museum told the Times that the institution believes that the works were gifts from Mondrian, but did not have evidence to prove this claim. A spokesperson for the museum said that Mondrian “regularly gave away paintings for which he no longer had any use.”