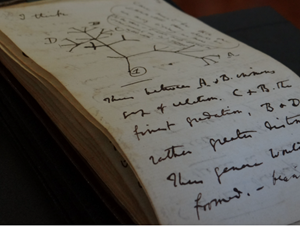 Charles Darwin’s iconic Tree of Life notebooks anonymously left in a pink gift bag, 15 months after launch of a worldwide appeal to find them.

Charles Darwin’s iconic Tree of Life notebooks anonymously left in a pink gift bag, 15 months after launch of a worldwide appeal to find them.

Two notebooks belonging to Charles Darwin, one of which contains his iconic 1837 ‘Tree of Life’ sketch, have been safely returned to Cambridge University Library, more than two decades after first being reported missing.

The notebooks were returned anonymously to the Library on March 9, 2022, and are in good condition, with no obvious signs of significant handling or damage sustained in the years since their disappearance.

They were returned in a bright pink gift bag containing the notebooks’ archive box and inside a plain brown envelope addressed to the University Librarian with the printed message:

Librarian
Happy Easter
X
The notebooks, which were wrapped together in cling film, were left on the floor in a public area of the library outside the Librarian’s office – on the fourth floor of the 17-storey Tower.

The police investigation around the notebooks’ disappearance and subsequent return is ongoing.

The original public appeal was shared around the world, generating thousands of news articles and reaching hundreds of thousands through social media.

Recognising the huge popularity of this material, and as thanks for this global effort to find the missing notebooks, Cambridge University Libraries will be putting the notebooks on display from July, as part of the upcoming free exhibition Darwin in Conversation, which opens on July 9.

"The sole aim of our public appeal was to have the manuscripts safely returned to our safekeeping and I am delighted to have had such a successful outcome in such a relatively short space of time.

"The notebooks can now retake their rightful place alongside the rest of the Darwin Archive at Cambridge, at the heart of the nation’s cultural and scientific heritage, alongside the archives of Sir Isaac Newton and Professor Stephen Hawking.

"Everyone at the Library was incredibly touched by the response to our appeal and to know that so many others felt the same sense of loss we did only reaffirmed our decision to ask the public for their help.

"We believe that decision has had a direct bearing on the notebooks being returned and we’d like to take this opportunity to give the public our heartfelt thanks.

"They may be tiny, just the size of postcards, but the notebooks’ impact on the history of science, and their importance to our world-class collections here, cannot be overstated." - Dr Jessica Gardner, Cambridge University Librarian.