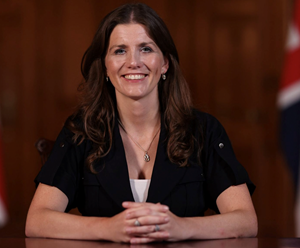 Michelle Donelan has been appointed secretary of state for the Department for Digital, Culture, Media and Sport (DCMS). She becomes 11th head of DCMS since 2010.

Michelle Donelan has been appointed secretary of state for the Department for Digital, Culture, Media and Sport (DCMS) by incoming prime minister Liz Truss.

Donelan has been the MP for Chippenham, Wiltshire, since 2015. She joins DCMS from the Department for Education, where she served as minister for higher education from 2021-22 and sat on the education select committee.

She holds the record for the shortest-ever tenure as secretary of state when she was briefly appointed to lead the education department in July 2022 during the wave of ministerial resignations that took place over former prime minister Boris Johnson's handling of the Chris Pincher scandal. She served as education secretary for 36 hours before resigning, saying Johnson had put cabinet members in an impossible position.

Before becoming an MP, Donelan had a career in marketing, with roles at Marie Claire magazine, the History Channel and World Wrestling Entertainment. She reportedly developed an interest in politics from an early age after being inspired by seeing Margaret Thatcher on television. She spoke at the Conservative Party Conference in 1999 at the age of 15.

Donelan is the 11th culture secretary since 2010. She arrives at a crucial time for the sector as it grapples with the impacts of the cost of living crisis.