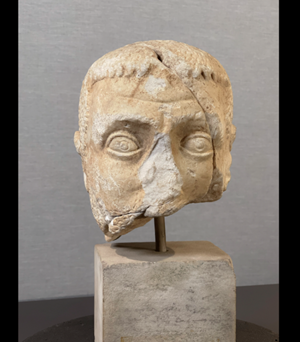 The Museum of Fine Arts, Boston (MFA) has transferred the Late Imperial sculpture Portrait of a Man to the Republic of Italy, from where it is believed to have been stolen during World War II.

The Museum of Fine Arts, Boston (MFA) has transferred the Late Imperial sculpture Portrait of a Man to the Republic of Italy, from where it is believed to have been stolen during World War II. The marble head dates to the 3rd or 4th century C.E. Its features were re-cut in antiquity from an earlier portrait, and it may represent the emperor Maximianus Herculius. It was found in December 1931 at Minturno, Italy, during a series of excavations undertaken by the University of Pennsylvania and the Superintendency of Campania in Naples. The head was published, inventoried and illustrated in a catalogue of sculptures from the excavations in 1938. During World War II, a number of archaeological finds and other works of art stored at Minturno were stolen, probably by German troops, or were otherwise dispersed in the upheaval of war. The Portrait of a Man was almost certainly taken at this time. After it was photographed in the 1930s, the sculpture suffered damage and lost its nose.

The Museum purchased the sculpture from the Swiss gallery Münzen und Medaillen in 1961, with no documentation of its collecting history. In July 2019, Professor Irene Bald Romano of the University of Arizona, who has published on sculptures from Minturno and is working on a publication on the fate of antiquities during the Nazi era, alerted MFA staff that the head had gone missing from Italy during World War II. This information prompted an investigation of the sculpture’s provenance. After verifying its excavation at Minturno and the loss of artwork there during the war, the Museum wrote to the Italian Ministry of Culture to inform them of the sculpture’s whereabouts in September 2019. The Ministry affirmed the MFA’s findings in July 2020 and requested that the head be returned.

The MFA is a leader in the field of provenance research, employing a full-time Curator for Provenance, who works with curators throughout the Museum to research and document the MFA’s collection on an ongoing basis. Findings are included in the Museum’s online collections database. The MFA follows the highest standards of professional practice in regards to issues of ownership and in its response to claims for works in the collection. If research demonstrates that a work of art has been stolen, confiscated or unlawfully appropriated without subsequent restitution, then the Museum will notify potential claimants, and seek to resolve the matter in an equitable, appropriate and mutually agreeable manner. A list of ownership resolutions at the Museum since the late 1990s can be found in Ownership Resolutions.