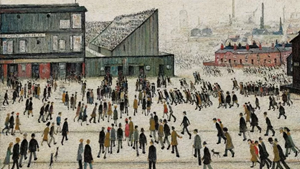 A mayor has called for an export ban to be placed on a Lowry painting valued at £8m to allow time for a campaign to buy it for his city "to gather momentum".

A mayor has called for an export ban to be placed on a Lowry painting valued at £8m to allow time for a campaign to buy it for his city "to gather momentum".

Going to the Match is to be auctioned by the Professional Footballers' Association charity later in October.

Salford Mayor Paul Dennett wants it to be bought and kept on public display. Calling for a ban on it being taken overseas, he said he would do all he could "to save this critically and important painting".

LS Lowry, who died in 1976, spent much of his life in Salford and his work is strongly associated with the city. His 1953 work, Going to the Match, was one of a number of paintings he did on the theme of sports and was inspired by Burnden Park, which was then Bolton Wanderers' stadium.

It won Lowry first prize in an exhibition, which was sponsored by The Football Association, and was last auctioned in 1999, when it was acquired by the Players Foundation charity for about £2m.

After purchasing the work, the charity loaned it to the city and it has been on show at the Lowry arts centre for the past 22 years.

In September, the foundation said it "no longer has any income guaranteed, so we have had to completely reposition" and would sell the work at auction to raise funds.

Mr Dennett, who has previously written to prominent local figures and business leaders asking for their help to buy the painting, said the government must step in to prevent it from being sold to an "international collector" and taken overseas.

He said that scenario looked likely, he "would urge the UK government to place a temporary export ban on this important piece of art to prevent it leaving the country".

"This will allow time for the campaign to gather momentum and help to raise funds to buy it," he said. "We need to do all we can to save this critically and important LS Lowry painting for people to access free here in Salford."

The work is due to be sold at Christie's in London on 19 October.