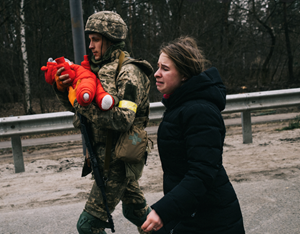 The W. Eugene Smith Memorial Fund is pleased to announce that Maxim Dondyuk (Ukraine) is the recipient of this year’s $40,000 W. Eugene Smith Grant in Humanistic Photography for his project, Ukraine 2014/22.

The W. Eugene Smith Memorial Fund has announced Maxim Dondyuk (Ukraine) to be the recipient of this year’s $40,000 W. Eugene Smith Grant in Humanistic Photography for his project, Ukraine 2014/22. Selected from a talented group of eight finalists, Mr. Dondyuk’s project chronicles Ukraine’s long-lasting battle for its true independence, national identity, and freedom from Russia.

The W. Eugene Smith Grant, now celebrating its 43rd anniversary, will help Mr. Dondyuk continue to document Ukraine during its self-affirmation as an independent country, with focus on the ongoing actions, and outcome, of the present battle between Soviet and European values. Mr. Dondyuk’s project was selected from over four hundred entries from 72 countries. Since the Smith Fund’s inception in 1979, it has awarded more than $1.3 million to photographers whose past work and proposed projects follow in the tradition of W. Eugene Smith’s career as a photographic essayist.

It's a great honor to become a part of the history of this grant and a huge responsibility!” Maxim Dondyuk exclaimed after being notified. “There are times when I experience hopelessness trying to be heard, to find funding for projects, and sometimes you want to quit. But something deep inside won’t let you. I’m thankful to the organizers of the W. Eugene Smith Grant and to the judges for highlighting my work. It helps affirm that the work we produce as photojournalists matters, and grants like this give us the voice we need to tell the stories on behalf of those who don’t.”

“We were extremely impressed with the quality, sensitivity, and passion that went into all of this year’s submissions, which made the selection extremely difficult but the overall review incredibly rewarding,” explained Michelle Dunn Marsh, chair of this year’s Smith Grant jury of three including award-winning photojournalist Eli Reed, and Naveen Kishore, founder of Seagull Books. “Maxim Dondyuk’s images of Ukraine unanimously resonated with the jury. Mr. Dondyuk’s body of work, and personal commitment to return to Ukraine to document this ongoing invasion speaks to the tenacity, photographic excellence, and depth of character that this grant honors,”