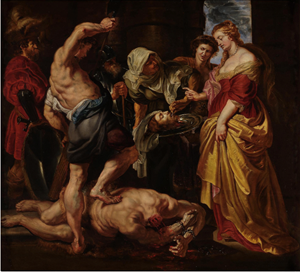 Highlighted by key early Rubens masterpiece 'Salome Presented with The Severed Head of Saint John the Baptist' estimated to sell for $25 - 35 million.

Collected with passion and rigor over three decades, the Fisch Davidson collection distills the essence and power of Baroque art between 1600 and 1650, comprising some of the very finest paintings in private hands by Guercino, Bernardo Cavallino, Valentin de Boulogne, Orazio Gentileschi and above all Sir Peter Paul Rubens, which together provide a comprehensive sense of the key artistic currents flowing through early 17th-century Europe. This January, 10 works from the collection will headline Sotheby’s Master’s Week Auctions, led by the jewel of this unparalleled collection, Sir Peter Paul Rubens’ Salome presented with the severed head of Saint John the Baptist. Painted at exactly the same moment in his career as the great Massacre of the Innocents (the Rubens that shattered all price records for Old Masters when auctioned at Sotheby’s in 2002), the Fisch Davidson Rubens was believed to have been lost, prior to its rediscovery in 1998.

“The Fisch Davidson collection began in earnest when the early rediscovered masterpiece by Guercino of Jacob Holding Joseph’s Bloodied Coat appeared in a Sotheby’s New York sale in January of 1995…. It was from that early acquisition that a tone and taste level for the collection was established. For me personally, it became immediately apparent that only the boldest images of best quality by the greatest artists would be considered. Indeed, that is what the ultimate result was.”

Christopher Apostle, Sotheby’s Head of Old Master Paintings in New York, commented: “ One would be hard-pressed to uncover a more exemplary collection of Baroque masterpieces, and I count myself lucky to have been able to encounter works of this caliber up close. Each of these artists had a hand in shaping art of the 17th century; and each still has the power to strike awe today, from the extreme emotion of Guercino’s Jacob to the beguiling beauty of Procaccini’s smiling Judith. Rubens’ remarkable Salome presented with the severed head of St. John the Baptist is the inimitable jewel in the carefully curated collection, in so many ways epitomizing the very essence of the Baroque.”

Through a series of immensely careful, thoughtful acquisitions, the collection was subsequently enriched by strikingly complementary and equally exceptional paintings by Guercino’s leading contemporaries, including key works by Bernardo Cavallino and Valentin de Boulogne, and the third of the famous “Sauli” paintings by Orazio Gentileschi, the other two of which are at the Getty Museum. Over the years, paintings from the Fisch Davidson collection have featured prominently in major museum exhibitions globally, at The National Gallery, London; the Prado, Madrid; The Metropolitan Museum of Art, New York (where Mark Fisch has long been a trustee) and elsewhere.

The collection was unveiled this morning in a special preview exhibition, featuring a performance by Baroque instrumentalist Marc Armitano Domingo. Works from Baroque: Masterpieces from the Fisch Davidson Collection will be on public view in New York now through 27 October, and from 4 - 13 November as part of Sotheby’s marquee auction week exhibition. Highlights will travel to Los Angeles, Hong Kong, and London this fall, before returning for pre-sale exhibition this January in New York.