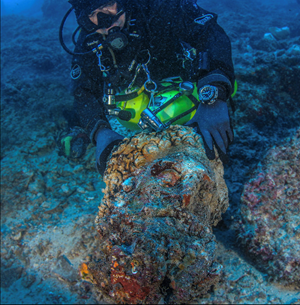 The second period (May 23-June 15, 2022) of the underwater archaeological research on the Antikythera shipwreck, within the five-year program 2021-2025, was successfully completed, linking the contemporary research to the iconic diving operations of 1900-1901.

The second period (May 23-June 15, 2022) of the underwater archaeological research on the Antikythera shipwreck, within the five-year program 2021-2025, was successfully completed, linking the contemporary research to the iconic diving operations of 1900-1901.

The research is conducted by the Swiss School of Archeology in Greece under the direction of Dr. Angeliki G. Simosi, head of the Ephorate of Antiquities of Euboea, and Lorenz Baumer, Professor of Classical Archaeology at the University of Geneva; the field research is under the supervision of the Ephorate of Underwater Antiquities, while the project is held under the patronage of H.E. the President of the Hellenic Republic, Ms Katerina Sakellaropoulou.

The main objective of the program is to formulate a clearer and more acute understanding of the ship, its route, its cargo and the wreckage conditions.

The 2022 field research included the relocation of selected sizeable natural boulders that had partially covered the shipwreck area during an event that is under investigation, weighing up to 8.5 tons each; their removal gave access to a formerly unexplored part of the shipwreck. A customized setup consisting of durable rigging, underwater lifting bags and pressurized air supply conceptualized and developed by the Hublot Xplorations team, of the popular Swiss watchmaker.

The exact position and the archaeological context of each finding have been precisely documented during excavation and will be integrated into the 3D model of the site that is under development since October 2022. Samples of sediments have been collected from predetermined areas of the seabed, allowing for a microanalysis that will lead to a better knowledge of the dimensions and precise position of the shipwreck. Together with the ongoing artifacts analysis, the newly applicable microarachaeological practices will enhance the ability to precisely reconstruct the disposition of the wreckage and the conditions of the sinking of the ship sometime during the first half of the 1st century BC.

The field research has been directed by Alexandros Sotiriou, associate researcher of the University of Geneva. The scientific personnel was additionally manned by Carlo Beltrame, professor at the University Ca’Foscari of Venice, Dr. Elisa Costa, researcher at that same university, Orestes Manousos (MA) and Dr. Isaac Ogloblin, and the specialized divers Haralambos Mitrou, Dimitris Romios, and Nikolas Giannoulakis who was also engaged with underwater photography utilized during 3D modeling. Four members of the Underwater Missions Unit of the Hellenic Coast Guard, Aris Machairidis, Dimitris Hatziaslan, Dimitris Kiosis and George Lytrivis daily also participated at the field work. Technical support was provided by the members of the Hublot Xplorations team Mathias Buttet, Michel Blumenthal, Aloïs Aebischer and Diego Carven and laboratory equipment for on-site analyses has been provided by the Faculty of Sciences of the University of Geneva (Laboratory of Crystallography and Department of Earth Sciences).

The diving architect of the Ephorate of Underwater Antiquities, Aikaterini Tagonidou, supervised all fled work activities on behalf of the Hellenic Ministry of Culture and Sports.

As in former years, the project has been on the profit of the supply ship “Typhoon”, provided by the A. C. Laskaridis Charitable Foundation. The coordination with its crew was led by Rear Admiral (retired) Alexandros Palatianos.

The main supporters of the research program are the Aikaterini Laskaridis Foundation and the Swiss watchmaker Hublot. The research is also funded by the Nereus Research Foundation, which was established in Geneva with a main purpose to support the Antikythera shipwreck research program. Telecommunications were supported by COSMOTE.