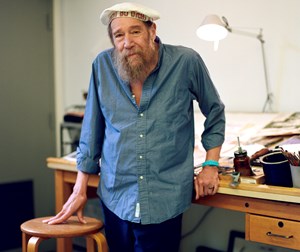 Lawrence Weiner, an American conceptual artist best known for his public installations featuring poetic words and phrases with graphic accents has died at 79. He passed away December 2, 2021.

Lawrence Weiner, an American conceptual artist best known for his public installations featuring poetic words and phrases with graphic accents has died at 79. He passed away December 2, 2021.

Weiner rose to prominence in the late 1960s when conceptual art was gaining traction in the US. He was part of a generation of artists questioning conventional modes of making and displaying art. At the time Weiner was creating grid-based drawings, shaped canvases and ephemeral interventions that sought to delineate public spaces. Before he became more widely known for his graphic text works, Weiner achieved fame within the art world for pieces that called upon the people presenting them to enact certain tasks. Often, the activities called for were odd and not particularly utilitarian.