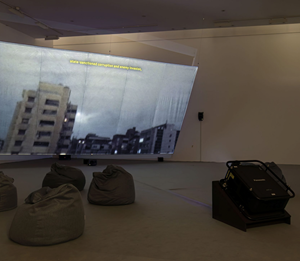 Lawrence Abu Hamdan is the third recipient of the Future Fields Commission in Time-Based Media, a joint initiative by Fondazione Sandretto Re Rebaudengo and the Philadelphia Museum of Art that supports the creation of innovative new work in video, film, performance, sound and digital art...

Lawrence Abu Hamdan is the third recipient of the Future Fields Commission in Time-Based Media, a joint initiative by Fondazione Sandretto Re Rebaudengo and the Philadelphia Museum of Art that supports the creation of innovative new work in video, film, performance, sound and digital art. The commissioned work, Air Pressure (A Diary of the sky), is an audio and video installation that further develops Abu Hamdan’s research into the political dimension of sound. Through extended and rigorous investigations, that gather and analyze testimony, recordings and archival documents, he creates works that expose and produce evidence of crimes and systems of injustice, often perpetrated against individuals and communities that have no voice in official legal contexts.

The investigation behind Air Pressure (A Diary of the sky) focuses on Lebanese airspace, specifically on a condition of ubiquitous and intense noise pollution that affects the lives of the Lebanese people and which the artist refers to as “atmospheric violence”. The sky over Lebanon is invaded daily by a foreign power as unauthorized planes and drones of the Israeli defense forces carry out an ephemeral occupation of the sky, a constant oppression from above producing acoustic frequencies that are physically and psychologically aggressive. The flights are carried in violation of the UN Security Resolution 1701, which was formulated in 2006 at the end of the conflict between Israel and Lebanon known in Lebanon as the July War. It is specifically thanks to documents filed with the UN reporting the violations that the artist could map the entire historical trajectory of the phenomenon, involving 22,111 flights by fighter jets, helicopters, drones and other unmanned aircrafts that over the last 15 years gave rise to a protracted sonic warfare. The artist calls it “a long bomb,” one that never arrives but, with its threat, indefinitely prolongs its destructive power.

Through the analysis of these data Abu Hamdan has produced an original research, never done before, that he made accessible on Airpressure.info, included in the exhibition. The website is a searchable and interactive database which includes both documents from the UN archive and accounts of flight sightings gathered through a campaign of citizen journalism activated by the artist via social media.

The video documentation thus collected, together with footage taken or commissioned by himself, forms the basis of the video installation Air Pressure (A Diary of the sky). The script focuses over a one-year period, from May 2020 to May 2021, linking data from flight records to private ear Abu Hamdan’s chronological account of the investigation process which took place in the same period.

The video is projected onto a screen made from sewn oil cloth, echoing a sound memory evoked in the video, the testimony of a World War II survivor who compares the sound of military aircrafts passing overhead to the ripping of oil cloth, as if the sky itself opened up, tearing apart. The work develops a compelling and sensory narration of the concept of atmospheric violence, offering a historical and political reflection on the use of noise as a tool for expropriation, conditioning and control.