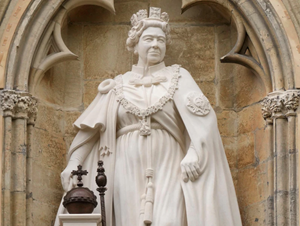 York Minster welcomed Their Majesties, The King and The Queen Consort to the cathedral (9 November 2022), for the unveiling and blessing of a new statue of Her Late Majesty, Queen Elizabeth II.

York Minster welcomed Their Majesties, The King and The Queen Consort to the cathedral (9 November 2022), for the unveiling and blessing of a new statue of Her Late Majesty, Queen Elizabeth II.

Their Majesties were welcomed on arrival by the Archbishop of York, Stephen Cottrell, the Acting Dean of York, The Reverend Canon Michael Smith and members of the Chapter of York.

After attending a short service in the Quire, Their Majesties met York Minster stonemason, Richard Bossons, designer and carver of the new statue, which honours the life of service and dedication of Queen Elizabeth. Their Majesties were also introduced to Minster staff and volunteers and guests from York and the region working to make a difference to their communities.

Their Majesties departed the Minster through the Great West Door where His Majesty unveiled the new statue of the late Queen. The Archbishop of York then blessed the statue and offered prayers for the day.

Following the unveiling His Majesty gave the following speech. He said: “Ladies and gentlemen, my wife and I are deeply touched to have been asked to unveil this statue to my beloved mother.”

“When this statue was first planned five years ago, during a reign of unprecedented duration and achievement, it was intended as a celebration of the late Queen’s Platinum Jubilee. Now, as we have witnessed, with great sadness, the passing of that reign, it is unveiled in her memory, as a tribute to a life of extraordinary service and devotion.

“The creation of this statue is also, if I may say so, a tribute to the support, affection and prayers that the community of this cathedral, and of this great city, always gave the late Queen, and all for which she stood in the life of the nation and the Commonwealth.

“The symbolism of the statue, combining the signs of Church and of State, is perfectly suited to its place on the West Front of this glorious building. It is a testament to the Minster’s enduring mission of showing God’s love and presence to all.

“The late Queen was always vigilant for the welfare of her people during her life. Now, her image will watch over what will become Queen Elizabeth Square, for centuries to come – a constant example of the duty and care for others, and for our community, which is the calling and the duty we all share.”

Commenting on the day’s events, Canon Michael Smith, Acting Dean of York said: “It was a huge privilege for the entire Minster Community to welcome Their Majesties yesterday. They were warm and generous with their time and enjoyed hearing about our work and shared life here together.

“The King asked lots of questions and showed great interest in the creation of the statue and the schools competition which ran alongside it. The statue was planned to mark the Platinum Jubilee and our late Queen’s dedicated service to our Nation and Church. It was fitting therefore, that her son, our new King, was able to come and unveil the statute, which as he so rightly said, will overlook Queen Elizabeth square “for centuries to come”.