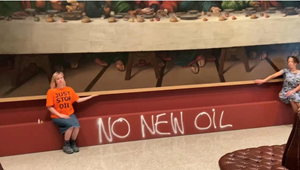 For the fifth time in the last week supporters of Just Stop Oil have disrupted a major art institution in an act of civil resistance.

For the fifth time in the last week supporters of Just Stop Oil have disrupted a major art institution in an act of civil resistance.

Five Just Stop Oil supporters have sprayed paint inside the Royal Academy and glued their hands onto the frame of The Last Supper. They are calling for the government to commit to immediately  halt new oil and gas licenses in the UK and for the directors, employees and members of art institutions to join the Just Stop Oil coalition in  peaceful civil resistance.

The Last Supper (c. 1520), attributed to Giampietrino, is a full-scale copy of Leonardo Da Vinci’s famous work. Giampietrino is thought to have been a pupil of Leonardo. It depicts the biblical scene when Jesus announces that one of his Twelve Apostles will betray him. [1]

“When I was teaching I brought my students to great institutions like the Royal Academy. But now it feels unfair to expect them to respect our culture when their government is hellbent on destroying their future by licensing new oil and gas projects.

“We have no time left, to say that we do is a lie. We must halt all new oil and gas right now, we will stop disrupting art institutions as soon as the government makes a meaningful statement to do so. Until then, the disruption will continue so that young people know we are doing all we can for them. There is nothing I would rather be doing”.

“No painting is worth more than my 6-month old nephew’s life. No sculpture can feed babies starving because extreme heat killed food crops. Nurses are lining up outside food banks, not galleries. If the directors of this gallery really believe that art has the power to change the world then I demand that they claim that power, close and refuse to open until the government commits to no new oil.

“I am an art student but there is no place for me to follow my calling as an artist in a world where I have no future. In no uncertain terms, the establishment – of which the Royal Academy is a part – has condemned me and all young people to suffer. I am outraged and you should be too.”

“I’m terrified for our future. We are heading for a collapse of our food supply and a world in which only the rich can feed themselves comfortably. Time is running out to change course or prepare for disaster and the message is not reaching the public: there is no free pass, we are all in this together and we must all rise up in civil resistance to force the government to stop new oil and gas.

“Da Vinci said that art is the Queen of all sciences communicating knowledge to all the generations of the world. The science still isn’t being heard.

“We are continually fed comforting lies that downplay the urgency of the climate crisis we face so that fossil fuel interests can continue to reap huge profits whilst the global south and our children are condemned to live in a potential hell. I call on all artists to harness every ounce of their creativity sounding the alarm in the hope that it cuts through the misinformation. Nothing is more critical at the moment.”

Yesterday, Hannah Hunt, 23 a psychology student from Brighton and Eben Lazarus, 22, a music student from Brighton glued onto the frame of John Constable’s the Hay Wain at the National Gallery and covered it with a reimagined scene. This followed three days of disruptions at art institutions in London, Glasgow and Manchester last week.