Jimmie Durham, Sculptor, Essayist and Activist Passes Away at 81 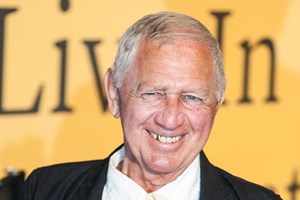 Jimmie Durham, artist, performer, essayist, poet and activist considered among the most influential names in contemporary art, has passed away at 81 in Berlin.

Jimmie Durham, 81, artist, performer, essayist, poet and activist considered among the most influential names in contemporary art, died in Berlin. Revolutionary master of sculpture and civil rights activist, Durham was born in Arkansas in 1940, but had lived in Naples for many years. In the 1960s and 1970s he was committed to the civil rights of African Americans and Native Americans. He was awarded the Robert Rauschenberg Prize in 2017. In 2019, the Golden Lion for Lifetime Achievement at the Venice Biennale of Art.

He is perhaps best known for making art that examined the legacy of colonialism and the role of Native American identity in American culture. It is this work that gained him wide acclaim—but also pointed scrutiny.

Durham was born in 1940 in Houston, Texas (despite his own account that he was born in Arkansas). His artistic career began with an interest in the intersection of the civil rights movement, theater, and writing in the early 1960s. He held his first performance at the Arena Theatre in Houston at the age of 23.

After a stint in Geneva, where he studied at the École nationale supérieure des beaux-arts, Durham returned to the United States. Inspired by the American Indian Movement’s 70-day occupation of Wounded Knee, South Dakota, he joined the group as a full-time organizer in 1973. He later became director of the International Indian Treaty Council, where he campaigned for U.N. recognition of Native sovereignty.

In part due to disagreements with the movement, he returned to full-time art-making in 1980. Over the next two decades, Durham produced trenchant assemblages, poems, and essays that needled the reductive white American narrative of Indian identity.

One of his most-reproduced works, a 1986 self-portrait, depicts the artist as a flat canvas cutout—traced by his partner, Maria Tereza Alves—inscribed with contradictory statements and adorned with synthetic hair, a chicken-feather heart, and a colorful wooden penis. (“Indian penises are extremely large and colorful,” one of the phrases on his body reads.).