IS beheads beacons of civilization 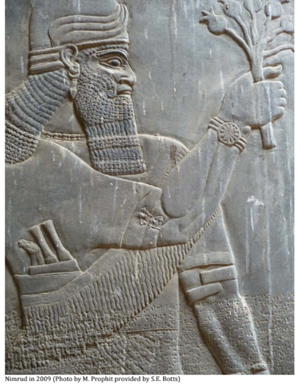 As the wave of destruction and violence continues to run rampant through Iraq and Syria, Artdependence Magazine will talk to as many actors as possible, individuals who have some involvement or knowledge on these issues.

As the wave of destruction and violence continues to run rampant through Iraq and Syria, Artdependence Magazine will talk to as many actors as possible, individuals who have some involvement or knowledge on these issues. We want to ensure that our readers remain aware of these  actions, carried out by IS and other religiously-motivated groups fighting for dominance in the region. For the following interview, we talk with Michael Danti, from the archaeology department at Boston University, we also asked Rob van de Velde, Alderman of cultural heritage in Antwerp and Belgian MP for reaction.

Artdependence Magazine: Michael Danti, you are an authority on these matters. The fact that cultural heritage sites are being destroyed is terrible. The loss of human lives is terrible in the first place but the loss of cultural heritage alongside these deaths is also a tragedy. Does the international community do enough to prevent the looting and destruction of cultural heritage sites in Syria and Iraq? Or are they more focused on removing those artefacts from their precarious locations  and bringing them to Europe or the United States, where they are safe?

Michael Danti: I am authority on mainly Syria and Iraq and Jihadi and Salafi networks, operating in that region, which also sometimes includes North Africa obviously.

Concerning the actions of the international community - what they do in this regard is something in between. The international community as a whole is doing a great deal to help Iraqis and Syrians in their own countries to preserve their cultural heritage, doing everything possible to achieve results. The project I work on, ASOR SHI (Syrian Heritage Initiative), alongside the US Department of State, is directly focused on trying to help Iraqis and Syrians preserve their heritage. APSA posted new information on the al-Dalati Mosque in Homs and the Haron Dada Mosque and Bimaristan Arghun al-Kamili in the UNESCO World Heritage Site Ancient City of Aleppo.

AD: And how do you do this?

MD: We try to provide support in various ways, especially to make them understand the significance of what is happening. In their country, they do not allow access to international organizations. We have almost no access to any information, because of the lack of communication, and in these conditions we must try to help them be informed on their situation. To create an awareness in Syrians and Iraqis on what is happening, the significance of what is happening.  We try to help them implement conservation and preservation projects as well.

AD: Have these efforts led to certain results?

MD: This is the most difficult thing - because this conflict is not like WWII or any previous war.  In this conflict there are sub-state actors or non-state actors, and the conflict and the level of violence is so extreme, it makes it very difficult to implement preservation and conservation projects as the conflict is ongoing.  The primary difficulty in this conflict comes from Salafi-Jihadi organizations like the Islamic Jihad, IS and Al Qaeda-linked groups.  This is a problem for all those involved in humanitarian work; these groups are kidnapping and killing journalists or people working with humanitarian issues. And this includes the subject of cultural heritage. So you come across many stories about the difficulty of international humanitarian efforts in Syria.  Salafi-Jihadigroups make it increasingly difficult to help Syrians and Iraqis, even if the work is carried out with complete neutrality. If we exercise complete neutrality they don't care, because they want to kidnap and kill foreigners for ideological reasons, and also to make money.

They also do not care about the international laws or treaties, because they are sub-state or non-state actors. When I give speeches on the news, when I discuss the effect of the sub-states, I describe them as multiplier effect. The multiplier effect of violence in terms of cultural heritage destruction, this level of destruction is greatly increasing the level of violence and destruction across the Middle East and North Africa, in general. 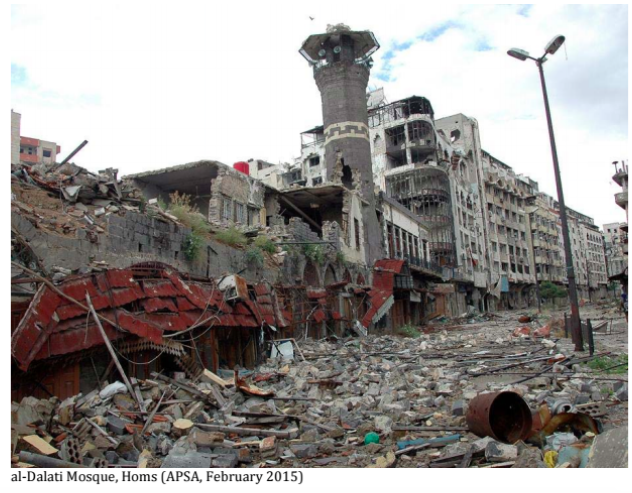 APSA posted new information on the al-Dalati Mosque in Homs and the Haron Dada Mosque and Bimaristan Arghun al-Kamili in the UNESCO World Heritage Site Ancient City of Aleppo.

AD: Did IS also start an alliance with Boko Haram  in Yemen?

MD: They have alliances with groups in Yemen and in Egypt supposedly, but I am not sure,  and certainly in Libya. And these alliances increase violence, including attacks on cultural heritage, because they choose these methods to express their ideology. There are also other groups like Jabhat al Nusra, who are not on good terms with Islamic State, but who nonetheless copy the actions of the Islamic State. So when Islamic State attacks heritage, other groups commit copycat attacks. There are other groups who want to be like the Islamic State, and their actions produce a multiplayer effect. The capacity of destruction is growing. They are also looting archeological sites, they facilitate looting and smuggling. They are, in a very real sense, "capacity builders for destruction".

AD: As UNESCO director Irina Bokova confirmed, Customs authorities are very well aware in Syria, Turkey, and in Egypt to pay extra attention for smuggled artefacts. Auction houses have been alerted for this purpose as well. But, in all this, what about Yemen? It also has a rich cultural heritage but, if I am not mistaken,  nothing has been destroyed there, yet.

MD: Not to my knowledge. The destruction has only been confirmed in  Iraq, Syria and Libya. 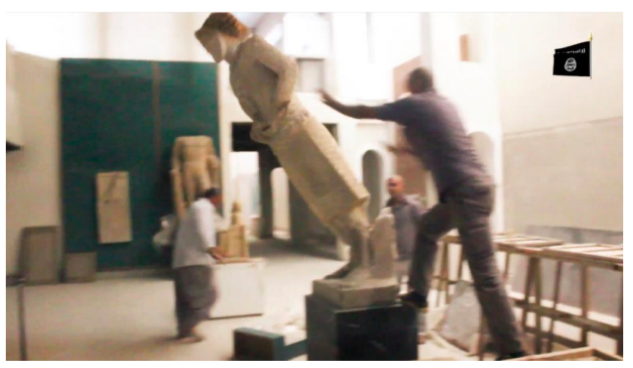 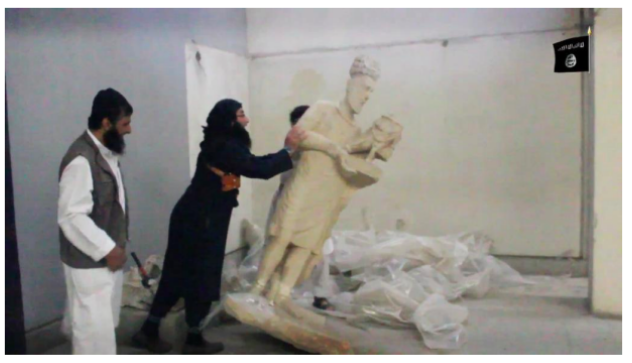 ASOR CHI has continued to gather information on the objects shown in the February 26, 2015, ISIS video showing deliberate destructions in the Mosul Museum and at the site of Nineveh.

AD: How do you see the situation evolving?

MD: It will get worse.  This is the biggest cultural heritage crisis since WWII.

AD: What can the international community do, exactly? Is further destruction in any way preventable?

AD: Is it time for the western world to talk with IS, or to negotiate with them?

MD: In my personal opinion, we should never negotiate with IS.

Reaction of Rob van de Velde, Alderman of cultural heritage in Antwerp and Belgian MP :
Any war in recent history also involved cultural theft and destruction. Especially during religiously-motivated wars, big parts of cultural heritage have simply disappeared. The first IS attacks were completely in line with this.

Rob Van de Velde: "For me it has been devastating to realize that nothing could be done to stop this nonsensical behavior. Even more, it made me wonder if cultural destruction would  become a structural element in the IS warfare. Because if it will, I sincerely doubt if we are equipped to withstand this kind of attacks." 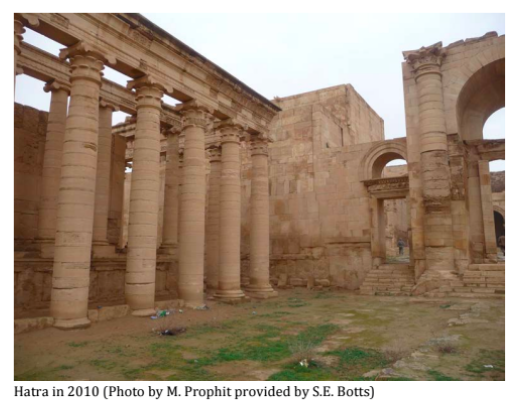 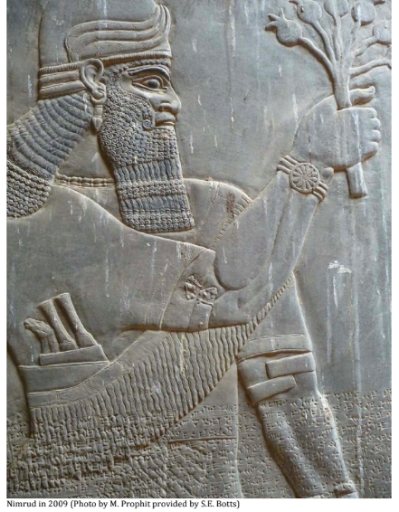 ISIS reportedly accelerated its deliberate destruction of heritage places in northern Iraq. The sites of Nimrud, Hatra, Khorsabad, and Assur were allegedly targeted.

Read our previous article "UNESCO mobilizes to prevent the further destruction of heritage at the hands of ISIS" here.

By Maria Martens Serrano
Maria Martens Serrano is a Dutch-Salvadoran writer. She studied under a liberal arts program at University College Utrecht, going on to graduate with an MSc in Sociology from the University of Amsterdam. Exploring a broad range of interests, Maria previously worked with a news website and a human rights NGO, before becoming involved with several art fairs in the Netherlands. She now writes on topics of arts and culture. In early 2015 Maria joined the team of Artdependence Magazine as editor and contributor.