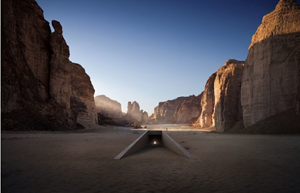 A clutch of artists have been announced as the first to embark on ambitious projects in AlUla’s new Wadi AlFann valley dedicated to large-scale installations.’

A clutch of artists have been announced as the first to embark on ambitious projects in AlUla’s new Wadi AlFann valley dedicated to large-scale installations.’

The Royal Commission for AlUla announced that US artists James Turrell, Agnes Denes and Michael Heizer will be joined by Saudi creative pioneers Ahmed Mater and Manal AlDowayan will create works for the 65sq kilometer space. The projects will be unveiled from 2024 onwards.

Meanwhile, the former director of the Whitechapel Gallery in London Iwona Blazwick has been named as the chair of the commission’s Public Art Expert panel, which advises on Wadi AlFann.

For his part, Mater’s installation for the valley, named “Ashab Al-Lal,” will use a subterranean tunnel and mirrors to give visitors the optical illusion of seeing a mirage, while AlDowayan’s “The Oasis of Stories” will be a labyrinthine structure inspired by the mud homes of AlUla’s ancient old town.

Ninety-one year old Denes will create a series of soaring pointed pyramids in a bid to explore civilization, advancement and achievement.

Meanwhile, Heizer, who is known for producing large outdoor earthwork sculptures and for his work with rock, concrete and steel, will create lineal engravings in the sandstone rock relating directly to the geology of the area and the varied detail of the Quweira sandstone.

Turrell will build upon the sensorial experience of space, color and perception by creating a series of spaces within the canyon floor. The viewer will explore these spaces via a series of tunnels and stairs.

“Wadi AlFann is unprecedented in its ambition,” Blazwick said in a released statement, adding: “It will set a new global example for experiencing art in dialogue with nature, celebrating the human creativity that unites communities across the world and inspiring current and future generations of artists. A display of such epic scale, set in a terrain as monumental as the AlUla desert, has the potential to shape the course of art history in real time.”